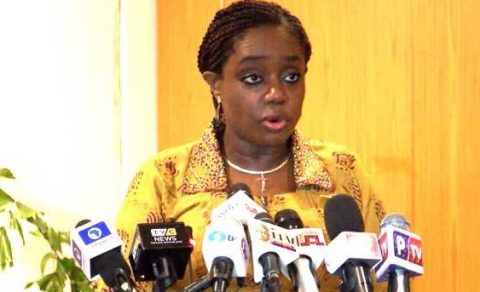 Alhaji Lai Mohammed made the declaration when he paid an official visit to the Abuja office of The Authority Newspaper.

He said the allegation was still being investigated, and and Mr. President was only waiting the conclusion before taking any decision.

While responding to a question from the editorial management of the paper on why Buhari was still keeping Mrs. Adeosun in his cabinet, Alhaji Mohammed restated that the case was still under investigation.

He added that the appropriate agencies were still investigating the allegation against the Minister and should be allowed to do their jobs.

“Until when an allegation is proven, you do not expect the President to act.

“The appropriate agencies have spoken and they say they are investigating. The only thing we can do is to wait.

“By saying that the minister should resign or be sacked while investigation is still ongoing may also not be feasible in our clime because of the level of false accusations.

“How many times have they accused me of embezzlement? Even recently, they said my driver jumped out of the car, abandoned me and decamped to Peoples Democratic Party.

“People even made the allegation that President Buhari did not have certificate’’ Mohammed recalled.

The Minister stated President Buhari would be usurping the powers of the investigating agencies if he sacked Adeosun before their report is submitted.

He added: “For instance, people have come to me that so and so TV and Radio stations are spreading fake news and I should shut them down.

“I told them that I do not have the power to do so; it is the responsibility of the National Broadcasting Commission, even though it is an agency under my watch.

“We are as concerned as you are; but having spent some time in government, you will see that a lot of lies are being peddled about us.”

Alhaji Mohammed assured that the government would not sweep the matter under the carpet.

It would be recalled that Mrs. Adeosun was alleged to have forged her NYSC exemption certificate.

Almost a month the allegation has been in the news, the Finance Minister is yet to make any notable public reaction to the accusation.