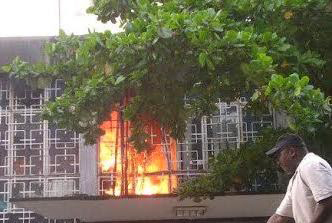 An unidentified fire fighter has collapsed as thick smoke envelops him while fighting to put out the fire that gutted the Lagos office of the Central Bank of Nigeria (CBN) in Marina, Lagos, Nigeria on Tuesday. Properties estimated millions of naira were destroyed in the inferno.

Thick smoke of fire was seen emanating from the third floor of the building around 5:10 pm after the workers have closed for work.

An eye witness said that the fire was severe and that he saw the smoke emanating from around the second floor of the about six-storey building, with fire fighters doing little to put out the fire.

While the fire was still raging, the cameras of two photo journalists from National Mirror, Yinka Adeparusi and Demola Akinlabi were seized and smashed by police officers attached to the Lion Building Police Station for daring to take pictures of the burnt scene.

Adeparusi was however, arrested by the police officers and taken to the Lion Building Police Station.

Director, Lagos State Fire Service, Mr. Rasak Fadipe said the fire service got an emergency call that the apex bank was on fire around 5:45 pm after the fire started around 5:10 pm.

According to him, two fire trucks were mobilized from the Onikan and Sari-Iganmu Fire Stations each with each carrying 10,000 litres of water to quell the fire.

He stated that aerial ladder was being used to fight the fire as it is a high rise building, adding that the fire started on the third floor of the building as the place had been condoned off to allow fire fighters to do their job.

The fire boss said officers from the Federal Fire Service, Union Bank and UBA were also assisting in quelling the fire as they brought in their equipment.

General Manager, Lagos State Emergency Management Agency, LASEMA, Dr Femi Oke-Osanyintolu disclosed that the fire was caused by power surge as the fire affected five offices on the second floor, adding that the fire was put out around 7:15 pm