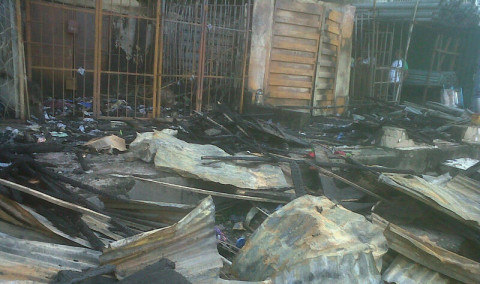 There was pandemonium on Tuesday at Iyana Ipaja area of Lagos state as a commercial building; known as Oko Oloyun House went up in flames. 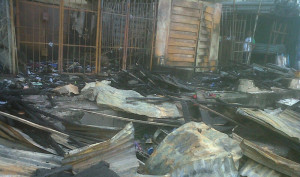 Scene of the Iyana Ipaja inferno

The fire destroyed properties worth over five millions of naira as shop owners count their loses.

African Examiner gathered that the fire started around 2 pm on Tuesday as a result of a spark from a welder who was constructing a container besides one of the shops.

The spark became a huge fire, which went out of control and spreads to a mattress shop.

Dele’s alarm spurred others to swing into a desperate attempt to help put out the fire but to no avail. Officials of the fire service were contacted, but did not arrive at the scene until the fire has wrecked havoc on the shops.

All the affected shops on the ground floor of the building were burnt completely with nothing to save from the fire.

The mattress Dealer, whose wife died recently, was said to have about N200,000 cash in the shop but well-wishers were able to get N50,000 before the shop was burnt down.

No life was lost in the fire incident.