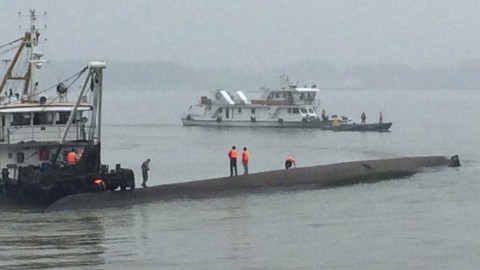 At least, five people have died while hundreds are still missing after a cruise tourist ship conveying 458 passengers capsized Tuesday on the Yangtze River, in Chinese Hubei region.

It was reported that the Captain of Eastern Star ship did not send emergency signal, living the residents around the river to raise the alarm, hence the rescuers dashed to the river bank, when heard calls from inside the upside-down hull.

The ship captain and the Chief engineer were among the first set of victims saved, of the accident which was caught in a cyclone. It sank in the Damazhou waterway section of the Yangtze, where the world’s longest river is measured with depths of about 15m (50ft) deep.

Chinese media quoted the residents as saying that the vessel sank within some minutes it took off and while many passengers on board were already slept.

Most of the passengers were tourists between ages 50 and 80 travelling, from the eastern city of Nanjing to Chongqing in the South-west of China, which is about 1,500km.