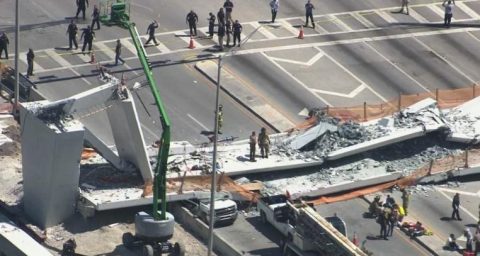 The Florida Highway Patrol confirmed the fatalities after multiple vehicles were crushed by the span near Florida International University’s campus.

According to Miami-Dade County Fire Rescue, there were people on the bridge and several cars underneath it.

Miami-Dade Fire Rescue Division Chief Paul Estopinan said they found eight vehicles trapped under the bridge after they got a call alerting the fire department of the incident. He noted that authorities planned to continue search and rescue throughout the evening.

“We could only see eight [vehicles] from the exterior of the bridge,” Estopinan said, adding that he did not know how many total cars might be affected. “We are creating holes just so that we can physically see [if there are others].”

Urban search and rescue teams were on the scene with live search dogs, heavy equipment and four cranes, officials said./NBC