For the records: Remarks By President Goodluck Jonathan At a Meeting With U.S. Secretary of State John F. Kerry 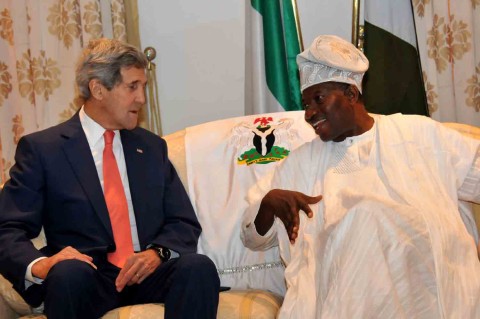 It was a pleasure to welcome Secretary John Kerry to Nigeria.  We had a candid and constructive discussion about a broad range of issues.

Nigeria is a vibrant democracy and the largest trading partner of the United States in Africa, with more than $18 billion in bilateral trade.  Our countries and peoples share a mutual admiration for each other and a deep commitment to freedom, democracy, and human rights. 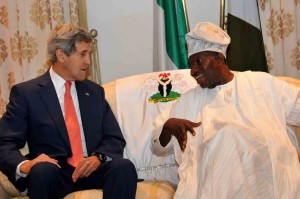 President Goodluck Jonathan Welcomes the U S Secretary Of States, Mr John Kerry to the State House Marina In Lagos On Sunday (25/1/15)

This is why we are together engaged in a struggle against a common enemy that promotes terror, fear, division, and violates human rights, most especially of women and girls, with complete impunity.  Winning the fight against Boko Haram in Nigeria and West Africa is absolutely essential to beat back the tide of religious extremism around the world.

Our security forces have been working tirelessly and courageously to achieve this goal.  I reaffirmed for Secretary Kerry that Nigeria is strongly committed to building the multinational task force to fight Boko Haram in partnership with Cameroon, Chad, Niger and Benin Republic under the auspices of the Lake Chad Basin Commission.  Indeed, I called publicly for such a regional approach at the African leaders summit in Paris in May 2014 and more recently in multilateral meetings.

We are pleased that the international community is now strongly united behind this initiative and agree that its success is critical. It is equally important that the multinational force receives the significant support that is required to address the threat through our global partners.

The United States, more than any other country in the world, has the most experience fighting armed insurgencies.  And having suffered the devastating attacks of 9/11, its people also understand the insecurity and fear that is the reality for the vast majority of peaceful, tolerant Muslims and Christians in North Eastern Nigeria.

This is why I firmly believe that enhancing and expanding various channels of cooperation between our two countries, in the context of growing international coordination, are of the utmost importance.  I discussed a number of ideas with Secretary Kerry to move such cooperation forward.

I emphasized to Secretary Kerry that I am deeply committed to ensuring that our forthcoming election is free, fair, and credible.  It is especially critical that all political parties abide by the Abuja Accord, which commits each to non-violence before, during, and after the election.

I made it absolutely clear that the May 29th handover date is sacrosanct.  In addition, the Government will provide all resources that are required by the Independent National Electoral Commission to ensure that the election goes smoothly.  I also emphasized that INEC is an independent body, which makes its own decisions without any interference from the Government.