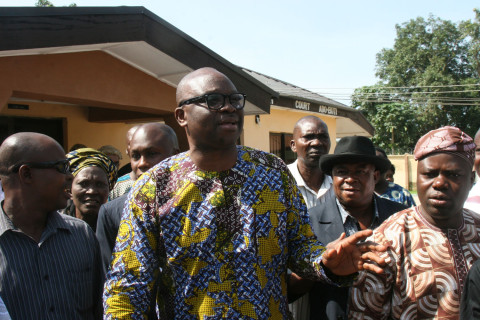 In a repeat of what transpired on Monday, there was confusion Thursday morning at the Ado Ekiti High court, venue of the recent Ekiti governorship Election Petition Tribunal  which is hearing the suit brought before it by a group called E- 11, as some hoodlums again stormed the court and beat up a judge.

The hoodlums have arrived around the court premises as early as possible and before the day’s proceedings commenced were approached by a Justice, John Adeyeye, who ordered them to leave.

The directive ignited violent reaction from the hoodlums, who descended on him, tore his clothes and beat him up to stupor. This incident occurred in the presence of the state Governor – Elect, Mr. Ayodele Fayose.

E – 11 is challenging at the Tribunal, the eligibility of Fayose to contest the June 21 governorship election on reasons relating to pending criminal case hanging on him.

It would be recalled the Monday fracas by the thugs left some members of the group with injuries, who are still recuperating in various hospitals in the state capital.

Justice Adeyeye after the attack has been taken to another hospital in the state capital for treatment.