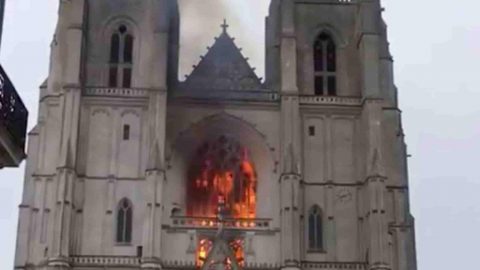 (AFRICAN EXAMINER) – The fire incident which broke at the Cathedral in the French city of Nantes has been linked to suspected arsonists.

French Prosecutor, Pierre Sennes said three fires were started at the site and an investigation into suspected arson was under way,

Sennes confirmed that the national police would be involved in the investigation and a fire expert was travelling to Nantes.

The fire began in the early morning, with massive flames visible from outside the building.

Over 100 firefighters brought the inferno under control after several hours.

The blaze destroyed stained glass windows and the grand organ at the Saint-Pierre-et-Saint-Paul cathedral, which dates from the 15th Century.

The incident happened a year after the devastating fire at Notre-Dame cathedral in Paris.

“When we arrive at a place where a fire has taken place, when you see three separate fire outbreaks, it’s a question of common sense, you open an investigation,” the prosecutor stressed.