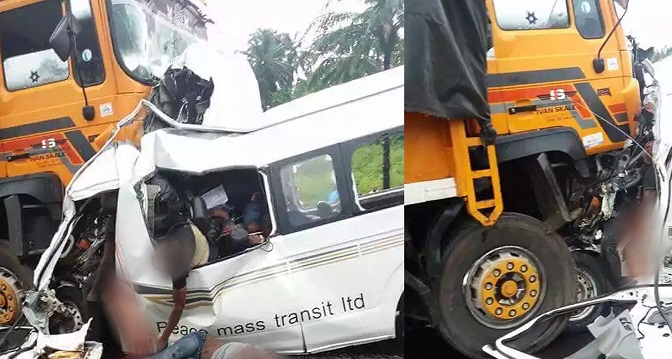 The Corps Marshal of the Federal Road Safety Corps (FRSC) has expressed displeasure at the high rate of crashes involving the vehicles of Peace Mass Transit (PMT), saying appropriate measures must be put in place for safety of the passengers and other road users.

Oyeyemi stated this while declaring open an interactive session between the FRSC and members of the Management of the Peace Mass Transit which to find lasting solutions to the menace.

According to Bisi Kazeem, Head, Media Relations and Strategy, FRSC in a press release  the Corps Marshal,  is alarmed by the growing rate of crashes involving vehicles belonging to the Company, noting that as the lead agency for road safety management and administration in the country, FRSC is conscious of its responsibilities to road users through appropriate policy measures put in place to address the challenges of road traffic crashes in the country.

“One of such safety measures is Road Transport Safety Standardisation Scheme (RTSSS) which was launched in 2007 as an intervention strategy for ensuring professionalism in road transport management in accordance with the FRSC Establishment Act 2007,” he stated. He further stressed that the National Road Traffic Regulations (NRTR) 2012 was equally enacted by the FRSC to deal with specific challenges of road safety, noting that Regulation 198 (1) specifically stated that all road transport operators who engage in inter-state road transport services shall establish a safety unit and appoint a safety officer as the  head of the unit who shall ensure that operational standards are maintained as prescribed in the regulation.

The Corps Marshal pointed out that over 5,000 drivers of fleet operators have been certified while 642 convoy drivers of the Nigeria governors were trained under the scheme. He was however concerned that though Peace Mass Transit Limited is registered with the scheme right from the inception and has been participating in the annual certification exercise, there are some safety measures that it requires to put in place to address the growing cases of crashes involving its vehicles. These he said includes ensuing that it has competent safety manager/assistants in all its terminals and presenting its drivers for recertification as required by law.

He urged the Peace Mass Transit to ensure that its terminals are made conducive for smooth operations and that provisions for emergency vehicles are made by the Company. FRSC Boss attributed the recent spate of crashes involving the Company’s vehicles to systematic safety failures which the Company must urgently address. “For instance, between January 2015 to December 2015, 8 crashes were recorded by the Company’s drivers involving 62 casualties. While 7 were killed, 55 of them were injured,” he stated.

Expressing worry at the sharp increases in crashes recorded by the Company’s vehicles between last year and January to June this year, the Corps Marshal noted that 11 crashes were recorded within six months of the year involving 95 casualties out of which 37 were killed while 58 were injured. “These quantum increases must be of interest to government and all road safety conscious individuals,” he stated.

“That is why the FRSC has decided to call this meeting today for members of the Corps and Management of the Company to critically examine the factors responsible for the falling safety standards among the Company’s  drivers with a view to finding lasting solutions to the menace,” Oyeyemi stressed.

The FRSC Boss urged the Company to present all its drivers and vehicles for recertification and safety audit by the FRSC while its safety managers must ensure that the speed limiters installed in their vehicles are not tempered with by the drivers.

“The Safety document prepared for the Company by the FRSC for its operational guidelines must be properly utilised and a new safety orientation must be imbibed by the drivers of the Company through more thorough monitoring and strict adherence to safety rules,” he stated.

In his remarks, the Chairman of the Peace Mass Transit who was represented at the occasion by the Executive Director, Operations, Ugwu Timothy Chidubem while assuring the Corps that the Company is concerned with the recent upsurge in the death rate recorded by the drivers, assured that adequate safety measures are being taken to address re-occurrence.

He enumerated some of the measures already taken to include installation of speed limiting device in the Company’s vehicles, avoidance of overloading, insistence on regular retraining of the drivers and ensuring routine checks on the vehicle as well as improvement in customer service.

The interactive session is expected to lead to resolutions on the necessary measures that the Company could adopt to address the menace of road traffic crashes involving the Company’s vehicles.