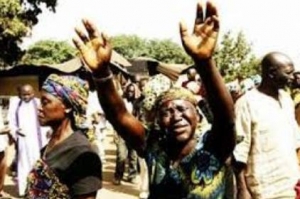 Gunmen suspected to be Fulani herdsmen have reportedly killed about 38 people in two separate attacks on villages in Sanga Local Government Area of Kaduna State.

Reports say the Fulani herdsmen invaded Kabamu in Fadan Karshi district and Ankpon in Nandu district on Monday night to attack their victims.

African Examiner gathered that 21 were killed in Kabamu village and 17 in Akpon village.

Meanwhile, Governor Ramalan Yero of Kaduna state has urged residents to remain calm saying government is working to end violence and attack on villages in the state.

“We call on people in Fadan Karshi and other parts of the state to remain calm as security forces have already been deployed to the area to maintain law and order.

“We should remain united and resolute in resisting obvious attempts by agents of darkness to create confusion and sow seeds of discord in our state.

“Security agencies have already been directed to commence investigation into the matter and are on the tracks of the criminals. No stone shall be left unturned in our resolve to bring perpetrators of this attack and all other criminal assaults on our people in the past to justice.” Governor Yero stated.