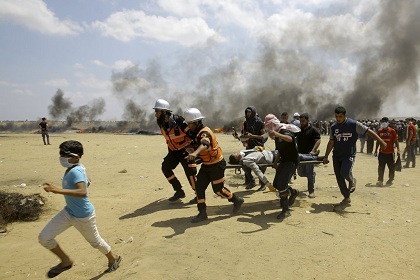 The incident is considered the deadliest day of violence in the disputed area since a war in 2014.

Another death of a 51-year-old man was reported Tuesday; still, peace prevailed as the dead were buried.

Israel has faced international condemnation following the massive casuality, from the UN, UK, France, Russia and others.

Israel has defended its actions, and the US has reportedly expressed its support.

Monday’s violence came as the US inaugurated its first embassy in Jerusalem, a move which is perceived as a controversial step by the Trump’s administration that broke with decades of US policy and incensed Palestinians.

Palestinians claims East Jerusalem as the capital of a future Palestinian state.

Many see the US move as backing Israeli control over the whole of the city, which Israel regards as its indivisible capital./BBC