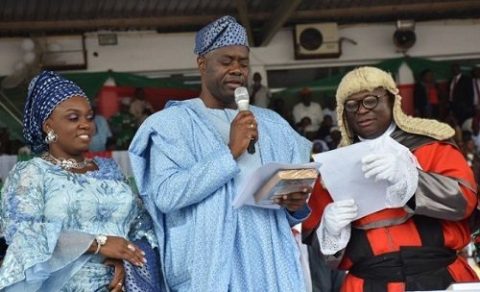 (AFRICAN EXAMINER) – The newly inaugurated Governor of Oyo State, Mr. Seyi Makinde, has promised to scrap the N3, 000 paid by pupils of all public primary and secondary schools in the south west State.

The new Governor also pledged to donate his salary to pensioners.

He admitted that the greatest challenge confronting the state was poverty and promised to tackle it with a drastic leap in agriculture, just as he pledged to look into the issue relating to over 400, 000 out-of school-children in the state.

Makinde made the promises Wednesday in his eight-page inaugural speech shortly after he and his Deputy took the oath of office at the Obafemi Awolowo Stadium, Ibadan, the State capital.

However, Governor Makinde shocked his audience when declared that the state was not capable of paying the new minimum wage of N30, 000. He however added that he believed in true Federalism.

“I believe the states should decide the minimum wage of their workforce based on individual realities. All states are not created equal, so it is against the principle of fairness to apply a blanket rule to govern them all.

“That being said, our plan is to make Oyo the first state to pay above the national minimum wage. We know this is possible. We have already set our plan in motion to make this possible. But, this requires time. We propose staggered increments.

“I met with organized labour during my campaigns and made a pledge to an open relationship. I intend to stand by that promise. We will have a sincere conversation and arrive at the best decision possible. Rest assured that the decision will put your overall best interests first,” he said.

“Reflecting on these firsts makes you realise that there must be something special about this region. The legendary Oyo greatness, the Pacesetter State, lives on.

“Increase their opportunities. Our region that housed the first university in Nigeria now has a state with the seventh highest number of out-of-school children. Over 400,000 children in Oyo State are out of school.

“Effective immediately, the school fees of N3,000 in state-owned secondary schools is hereby abolished. We want enrollments to go up, we want our children off the streets and in the classrooms. We are throwing the school doors wide open. Whoever opens a school door, opens an opportunity. We are opening opportunities for a brighter future.

“We also know that education standards in Oyo State are poor. Oyo State recently ranked twenty-sixth in Nigeria in WAEC performance. While we invite the students to come in, we will focus on raising the standard of education in Oyo State. We will work on providing needed infrastructure and manpower by increasing Oyo State’s education budget to 10% of our total annual budget, increasing yearly until we match UNESCO’s recommendation of 15-20%. We will be a pacesetter state in education.

“We know that quality education is not possible without quality teachers. Quality emoluments and benefits attract quality teachers. We are not ignorant of the plight of our dear teachers. We know the state of the teacher’s pension scheme. During my campaigns, I promised to donate my entire salary as governor to the Teacher’s Pension Fund. I stand by that promise’’ Governor Makinde assured./The Punch