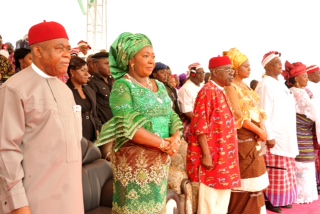 Abia state Governor, Chief Theodore Ahamefula Orji, has declared his intention to run for the Senate in the 2015 general elections. 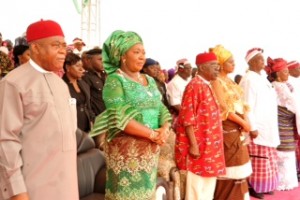 The Governor made the declaration on Saturday at a civic reception jointly organised in his honour by the people of Ikwuano, Umuahia North and Umuahia South council areas of the state.

He explained that his decision was due to pressures from his people urging him to vie for the Senate, saying as an obedient servant he had no choice other than to accept their request.

“For some time now, there has been so much pressure coming from different groups, communities, individuals and organisations that I should run for the Senate.

“Since this is coming from my people, I have no choice than to accept the demand’’, he stated.

The Abia chief executive, had during the event, thanked the people for having faith in him, stressing that they could not have requested him to go and represent them at the senate if they do not believe in him.

He however, described the ruling peoples Democratic party PDP as “the only party in Nigeria today with a national outlook’’, and the only party that could give Ndigbo (Igbo people) a voice in the country.

He listed some of the achievements of his administration to include the construction of Abia State Diagnostic/Specialist Hospitals in Umuahia and Aba, over 250 healthcare centres and two state secretariats.

Others according to him are an international conference centre and a new Government House (under construction).

In his remarks, Chairman of the organising committee, Chief Charles Ogbonnaya, said the reception was organised to honour and celebrate the governor.

Ogbonnaya noted that Umuahia, the state capital, had not witnessed significant physical development since the creation of the state in 1991 until the present administration.

“The infrastructure development that has so far taken place within the second tenure of the governor is unparalleled’’, Ogbonnaya said.

He, therefore urged Orji to run for the Abia Central senatorial seat in the National Assembly, saying that people had adopted him as their sole candidate for the Senate in 2015.

Governor Orji, who hails from Umuahia, will complete his second tenure in office, come 2015.

The governor was conferred with the traditional title of Omeudo-gburugburu (Ambassador of Peace) by traditional rulers from Ikwuano and Umuahia, comprising nine clans.