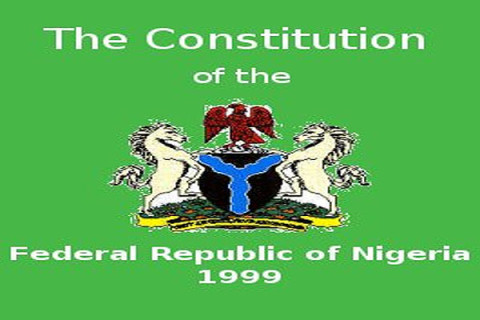 A Non-Governmental Organization, Champions for Nigeria has hailed the delegates of the on-going national conference for recommending that the immunity be removed from the Nigerian constitution, blaming lack of good governance in Nigeria on misconducts and corruption in public offices.

The Global Media and Publicity coordinator of the group, Dr. Olayiwola Ajileye, charged Nigerians to support the recommendation of Prof Jerry Gana led committee in taking a consensus approach to expunge the controversial clause from the constitution.

Olayiwola said in a statement that, “It is a long overdue and indeed a perennial demand of the entire Nigerian citizens that Nigerian democracy and governance development does not need Immunity Clause in the constitution and Champions for Nigeria (CFN) has been at the forefront of the campaign for the removal of this clause since 2008. We organized and sent 10000 signed petitions to the Senate and House of Representative in 2009 about this matter.

“As an organization that promotes good governance, transparency in public life and democratic accountability, not only have we demonstrated our commitment in words but also in action writing countless articles, rejoinders and letters to the National Assembly to register our disaffection for this Section 305 of the Constitution. For example, an article authored by Mr Akintokunbo Adejumo (Global Coordinator, CFN) in February 2008 titled “The Immunity Clause: To Stay or not to Stay” gave a robust intellectual argument and debate about the subject of immunity clause.

“Similarly, in February 2008, there was “Petition for Immunity Clause Removal” published in the www.NigeriaVillageSquare.com, this was also syndicated in so many online media and newspapers.” he explained

Olayiwola also disclosed that the group has organized campaigns, road shows and rallies, home and abroad to advance our belief that Immunity Clause stunts democracy gain, advising that if Nigerians are serious about good governance in the country, then immunity clause must not be allowed to remain on the constitution, stressing that It must be uprooted branch and root wholly.

His word: “Corruption is the most debilitating infirmity of our current democratic struggle and there is no way a nation will develop and attain its developmental potential if there is no political accountability to the voters and electorates. If we aspire as a nation for an egalitarian society where every citizen has a stake, we must support the recommendation of the Gana-led confab committee. The immunity clause has been severally abused by majority of the elected public office holders particularly the Executive arm of government and we have many examples of this abuse on record. It promotes arbitrariness, recklessness and state sponsored assassination. It has perpetuated the culture of grand corruption and wanton embezzlement of resources meant for running the affairs of the country. Many cases of Ex-Governors still dotted the court case log which the EFCC has been prosecuting with no end in sight.” he stressed.

He however, lauded the group’s commitment in the advancement and deepening of Nigerians democratic system by promoting transparency in public life, saying, “that is why we align with the National Conference committee on Politics and Governance, headed by Prof Jerry Gana in taking this consensus approach to expunging this canker worm of a clause from our constitution. This will create room for positive governance and openness in public life”

He added that, The fact that we don’t want people going around, that the government is above the law, the issue of immunity clause should be removed from our constitution. This is a resounding pronouncement that has great potential in changing our nation for good. There should be standard and discipline in public life, there should be strict ethical guidelines and framework for people who are custodians of our collective wealth and resources and there should be no cover up, there should be openness to scrutiny and probity in how the nation resources are utilized. The call by the confab committee is in consonant with the goal of CFN and the mainstay of our activities over the years.” He disclosed

Olayiwola therefore commended the confab committee for reaching a consensus decision, stating that, “we are convinced that the committee members are people who have vision of an egalitarian Nigerian society and have the best interest of the Nigerian nation and its citizens at heart. The National Confab should therefore approve this and give force to the recommendation and the National assembly should toe the lines of dignity to take due action to effect this recommendation for the benefit of the entire nation. Corruption and lack of probity has crippled our development and it has made mockery of the fight for democratic society for which many lost their lives.”

Calling on the Nigerian Judicial System, he advised that the abuse of our judicial process by granting of inordinate court injunctions that hampers public investigation to cases of grand corruption of public officials should be halted.

He pointed out that it will work in tandem with the call for removal of immunity clause to strengthen our public life and service delivery, noting that the spate at which public office holders run to court to buy injunction off the shelves when there is a public call for accountability should be seriously frowned at.

“There is a recent example in the Petroleum Department where the head of the Executive arm appointed to lead this sector of our economy has gone to court to halt the House of Representative’s investigation of abuse of public funds to the tune of 10 Billion for personal purposes. There are so many historical examples in the life of our democracy where the court process has been abused to shield corrupt enrichment and mismanagement of public resources.

“Champions for Nigeria (CFN) also advocate for Public Disclosure Act otherwise known as Whistle-blower Act (No Secret Act) to be promulgated and added to our constitution to give protection to genuine citizens who help to expose clear corrupt activities of the people in government or public life. This will offer protection against intimidation, harassment and undue discrimination in work place or in public service to individual who whistle blow to expose corruption in public life. This will also promote and strengthen the fight against corruption in every sphere of life in the nation and strengthen the governance process once the immunity clause is removed.” he urged

Olayiwola also explained that The EFCC, under Farida Waziri ran a campaign of “See something, say something”, but noted that there is no legal cover for those who make bold to say something when they see something.

He however deliberated on a recent incident at the university of Lagos, where an Ex-University of Lagos man was handcuffed and taken to Delta State to be punished simply for whistle blowing the corrupt activities he observed in the Bursary system administered by the government of Delta State under the supervision of a Professor.

“There is no protection for the action he has taken and as we speak, he is being taken to Delta State to be questioned and probably tortured. Champions for Nigeria call on the Federal Government and the Senate to look into this particular case with a view to ensuring that no citizen who see something and say something is unlawfully punished and there is recourse to justice and legal service to defend them, otherwise the removal of the immunity clause will be meaningless and most citizens will remain muzzled up unable to whistle blow for fear of being tortured or harassed.

“We call on the National Confab delegates to support the recommendation once it is presented to the plenary for approval. We are sure that it will be a recordable achievement of the confab if this becomes a reality in our current political climate.” Olayiwola advised