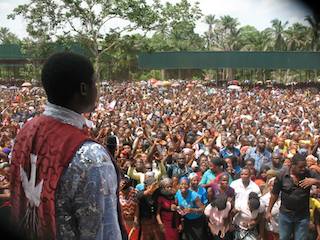 Human Rights Writers’ Association of Nigeria (HURIWA), a non-governmental organization (NGO) has instituted a petition before the Nigeria’s Human Rights Commission (NHRC) urging the Commission to investigate the remote and immediate circumstances surrounding the recent stampede that killed over 28 persons in Uke, Anambra state. 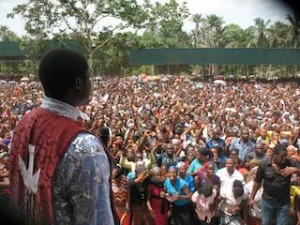 The association urged the Executive Secretary of the Commission, Professor Bem Amgwe, to take up the matter with a view to finding the root cause of the stamped which happened during Christian Night vigil worship in the premises of a Church.

The group also demanded that the Anambra State Governor must publicly apologize to the people of the state for his administration’s failure to institutionally set up a workable agency for emergency and accident rescue missions which would have reduced and or eliminated the high casualties recorded during the unfortunate stampede.

The association in a statement jointly signed by its National Coordinator, Comrade Emmanuel Onwubiko and National Director of Media Miss Zainab Yusuf, added that such ineptitude on the part of Obi-led government, and the way politicians in the state have politicized the unfortunate incident, equally amounts to unending senseless and insensitive dancing on the graves of the departed worshipers who perished in the stampede.

The group said since the welfare and security of the citizenry was the prime constitutional obligation of government, it is inconceivable that such a monumental spiritual event  in Anambra state was not attended by sufficiently equipped state run emergency management and rescue agency. The association also condemned the poor emergency rescue mechanism in place in Anambra state and advocated the creation of a vibrant and well funded state emergency management agency patterned after the National Emergency Management Agency of Nigeria..

To safeguard the people of Anambra state from ever witnessing such a deadly but avoidable human disaster, the HURIWA said it was imperative for the Anambra state Governor to immediately set up  a structure and work out transparent mechanism for the payment of  proper financial compensation to surviving relatives of all the 28 worshippers that reportedly died.

The group also noted that it has lost confidence in the neutrality of the Anambra state Government setting up a probe panel hence it has urged the National Human Rights Commission to step in and begin independent and comprehensive probe of the entire circumstances surrounding the stampede.

They further warned that posterity and history will be very harsh on Governor Peter Obi and Anambra opposition politicians should they continue to play dirty partisan politics and engaging in meaningless media warfare with this unfortunate loss of precious lives of citizens and fail to objectively probe and determine to its finality, the causes of that sad incident and proceed to prosecute all indicted culprits who precipitated the deadly stampede upon completion of the independent investigation by the National Human Rights Commission.

HURIWA also stated that since the bulk stops at the table of the executive governor, Mr. Peter Obi has no choice but to tender unreserved apology to Anambra state people for the numerous flaws and miscalculations that occasioned the stampede and show the open determination of his administration to put all the necessary structures and measures in place to avoid a repeat of such a calamity in the near future.

Reminding the state government of its constitutional obligation to protect lives and property of its citizenry, the association therefore called on state governments in the country to compel religious bodies to only conduct their services in venues that are safe and conducive to avoid the repeat of the Uke Anambra deadly stampede.

“The Anambra State governor must identify those that died and work out effective, transparent and accountable strategies for payment of meaningful financial compensation to families of the dead because government failed in its constitutional duty to protect their lives from the unwarranted stampede”, the group further stated.