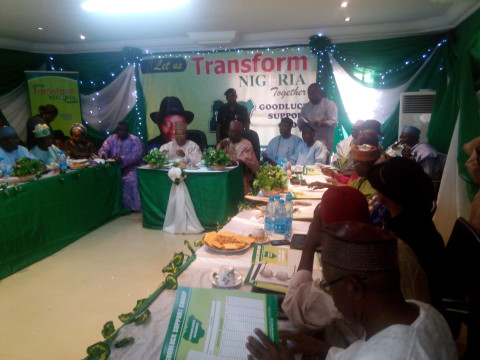 The Elders’ Advisory Council of the Goodluck Support Group (GSG) met this morning in Abuja in what appears to be a strategic meeting to map out plan to unite the majority in the People’s Democratic Party (PDP) behind the president’s leadership. 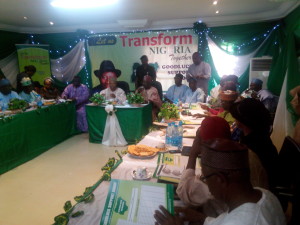 The gathering which turned out to be a gathering of Who is Who within the PDP paraded such heavy weights as Senator Ibrahim Mantu, Prof. Tunde Adeniran, Gen. Sabo (retired), Mrs. Biodun Olujimi and several others.

Mantu, a former Senate Deputy President itemized many projects that the PDP government under Dr. Goodluck Jonathan has completed and asked that even though it is not yet time to campaign, Nigerians cannot be swayed or deceived by any form of gang up against Mr. President.

Mantu went further to state that the calibre of men and women at the GSG elders council is an indication that those that matter within the party are solidly behind the transformation agenda of President Jonathan.

Special Adviser to the President on political affairs, Bar Ali Ahmed Gulak, said that his boss had been under pressure by his numerous supporters to contest 2015 presidential election.

Gulak also noted that Nigerians in the Diaspora were itching to come back to the country in order to cast their votes for the People Democratic Party (PDP) come 2015.

In his report to the Elders, Gulak stated that “Since our last meeting, we have received various support groups being coordinated by the GSG. We have, as of today, 1665 . The last to visit was the Ochendo Solidarity Movement from Abia State. About 150 (groups) of them came to this office. We discussed. They have called on of Mr. President to declare his intention.  They said that they were not flattering”,  he  stated.

Gulak, who is  also the National Coordinator of the GSG, however quickly pointed out that Nigerians would have to wait until next year as his boss now only focuses on fixing Nigeria.

Speaking further,  Gulak said that Nigerians in the Diaspora, were enthusiastic about the organization when it launched its US branch.

“They  told us that they would not only vote, but  they would mobilize themselves to come back and register and  also ask their relatives to vote for PDP”, he explained.