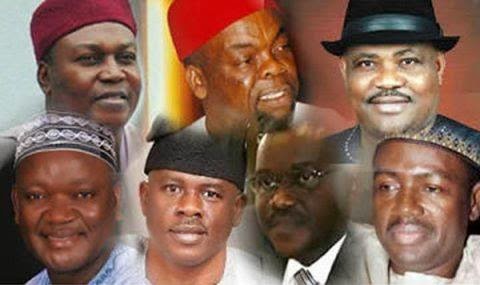 By Tajudeen Balogun, Head, African Examiner, Nigeria Bureau – Ahead of 2015 general elections, the Nigerian Political landscape is gradually becoming frenzy; calculations and permutations getting more complex and sophisticated, leaving the outcome at every level to be highly and strongly unpredictable.

As we speak, there is no other better ‘barometer’ to gauge and judge how dicey the outcome of general elections might turn, than the results of the governorship, National and State Assembly primary results of both the opposition All Progressives Congress (APC) and ruling People’s Democratic Party (PDP) across the State of the Federation in the last one week or thereabout. 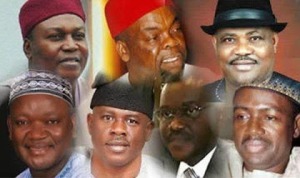 One very key point and interesting dimension is the questions from the critical minds that as Nigeria marches to yet another general election, who actually holds the ace; who determines what and who commands huge respect of the party stalwarts and ultimately whose interest eventually and finally prevails?

What is shocking now are the devastating political blows hauled at and setbacks currently being suffered by some of the supposedly ‘big, strong and influential’ personalities in their States. Not only few analysts and pundits had viewed and calculated that some of the ex-Ministers will largely enjoy the benefits of their popularities, financial influence and the ‘Abuja’ backing to successfully scale the keenly competitive hurdles in their States. Except in one case – Rivers State, reverse were the outcome in others. Even the only victorious – Wike’s emergence, has been trailed with rancours and resentments among the State’s party political power blocs till the moment.

The Former Minister’s victory with a total of 1, 083 out of 1,108 total valid votes cast in yesterday (Monday) Rivers State (PDP) governorship primary was on account of support the Ikwerre born candidate enjoyed from Mr President’s wife, Patience as well as the President. This summarily implies without this backing, Wike could probably have fallen by the way. However, controversies surrounding the congresses that produced delegates for the primary have refused to abate for once.

Former Health Minister, Professor Onyebuchi Chukwu, would have probably begun to wonder why the headaches in clinching his South Eastern Ebonyi State, given his former status and the support of the incumbent Governor, Matin Elechi. He might have also not phantom or imagined the resenting interest coming from the unexpected directions – the First Lady  and Secretary to the Government of the Federation, Senator Anyim Pius Anyim who were (allegedly) fronting for Governor Elechi’s Deputy, Engr. Dave Umahi, and who has been declared the winner of the Monday governorship primary.

Latest reports from the State have it that both the sitting Governor and his political ‘son’, Professor Chukwu are threatening to cross carpet to another dying opposition, APGA to achieve their political aims. The duo reportedly boycotted the primary.

Similarly, one would have expected the vocal and articulate Maku to use his political weight and goodwill (not certain if any) to overrun other PDP aspirants in the Nasarawa PDP governorship primary, but that thinking is an ill-conceived one. The former Federal government Spokesman was not only floored, but humiliated by a political ‘greenhorn’ and an academia, Yusuf Agabi, who polled 214 votes to wrestle Maku, who scored 160 votes.

Perhaps, the minister who totally failed to do his homework properly, hence received the heaviest blow was Wogu. The former Labour Minister was defeated with a landslide by the outgoing Governor Theo Orji of Abia, South Eastern State candidate, Mr Okezie Ikpeazu who was voted to victory with a total of 483 votes. The first runners up, Uche Ogah polled 103 votes, while the former labour Executive manage to muster 33 only votes to come a distant second runners up!

The centre of Excellence, Lagos State for now, is not left out of the miscalculation, regarding the misfortunes of the recently resigned Ministers. In fact, its primary was not without the expected but dreaded violence, owing to the involvement of certain character as aspirant. The exercise which was trailed with gunshot exchanges by the aspirants’ thugs ended up to be the most fraudulent, incredible and riotous primary perhaps for now, in the country.

The Chairman of the primary election, Senator Umar Kumo has earlier announced accreditation of 806 delegates, but at the close of voting announced aggregate of 867 total valid votes to have been cast, leaving the difference of 61 ‘ghost’ votes?

Former Minister of State for Defence, Musiliu Obanikoro who was declared first runners up having garnered  a total of 343 votes as against total of 432 votes polled by the winner, Mr. Jimi Agbaje, was enraged, and has vowed to challenge the primary outcome in court. Obanikoro had also threatened in his remarks to journalists that if the party fails to do the right thing, its chances of victory in the State are hanging in the balance.

The cases of ex Ministers Ortom and Ishaku went the same way, with the other ex-cabinet colleagues. What are the political implications of the unfolding dynamics, especially with respect to the party and their candidate chances in the forthcoming general elections? An Information and Communication (ICT) Technologist, Dr. Jubril Salaudeen, told AFRICAN EXAMINER in an interview that the development was “an indication that President Jonathan is not as popular at the grassroot”

“Take for example the situation in Lagos State; how do you explain the fact that Jimi Agbaje who joined the PDP only weeks ago somehow managed to garner more delegate votes than the consummate politician called Obanikoro? How do you explain the boycott of the primary by candidates in Adamawa, Ogun and Rivers State? For me, we cannot read much into this process. It is nothing more than the power of the mob” submitted Jimoh.

What is playing out in some of the party primaries is suggesting that the political power play is also not mathematical. Some of the Ministers might have been taught a bitter lesson that ‘Abuja politics’ is far different from the respective local politics. They must have also been faced with the reality that it is only with ‘Abuja interest’ and some local backings the springs could be pulled, otherwise, the unfolding disgrace and humiliation would be the outcome.

As some strongmen in the ruling PDP are falling in their political aspirations, owing to certain reserved powers and preferred interest, will the offended characters swallow the the disgrace and march along with the party ahead of the big battle; will they cross carpet (one of the Ministers is considering the option); will the prevailing developments have untoward impacts on the ruling PDP, then signal victories for the opposition APC?

And as the opposition prepares for its Presidential primary Wednesday/Thursday this week, will there be any shocker; unexpected or surprise with the general expectation on the final outcome?

Certainly, Thursday afternoon and February 2015 might be too long of a time for Nigerians and the rest of the world to get answers to some of these posers.