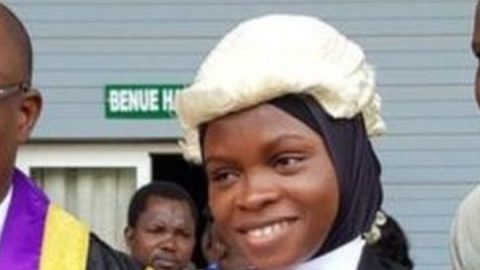 (AFRICAN EXAMINER) – The Muslim Rights Concern (MURIC) has commended the Nigerian Law School, the Body of Benchers and the Council of Legal Education for deeming it right to grant redress by calling Amasa Firdaus to bar with her hijab.

The group in a press statement signed Wednesday by its director and founder, Prof. Ishaq Akintola, said the Nigerian Law School has succeeded in restoring the confidence of Nigerian Muslims in legal education by giving recognition to the identity of the Muslim person.

The organization further confirmed that the young Lawyer was allowed to wear her hijab as she joined another 1,550 students with 11 others, recalling ‘’Firdausa Amasa had earlier been denied entry into the hall for the ceremony in December 2017.

In spite of its commendation, MURIC appealed to the authorities to allow other female Muslim students who wish to wear hijab below their wigs in future call to bar ceremonies.

It argued that Muslims could not be fully integrated into all aspects of Nigerian life unless ‘’authorities make inclusiveness a cardinal principle in their policies, rules and regulations’’.

In addition, MURIC hailed the House of Representatives for its quick intervention in the Law School hijab saga, as well as other Islamic organizations which showed interest in the struggle to liberate the Nigerian Muslim woman from the shackles of neo-colonialism as epitomized by the Amasa Firdaus phenomenon.

“In particular, we treasure the advice, logistic and diplomatic support provided by the Nigerian Supreme Council for Islamic Affairs under the able, visionary and dynamic leadership of the Sultan of Sokoto, Alhaji Sa’ad Abubakar III. Equally praise-worthy are millions of Muslim youths who heeded our appeal for calm and therefore avoided public demonstrations over the Law School hijab imbroglio. This is indubitable evidence that MURIC’s efforts at re-engineering Muslim youths towards non-violence is yielding fruits.

“To cap the edifice, we salute Amasa Firdaus. This is our heroine and our ambassador extra-ordinary. She is the game changer who successfully challenged an unjust status quo. Her name must be written in letters of gold when the history of the liberation struggle of Nigerian Muslims… is finally chronicled’’.

“We doff our hats for her father, Alhaji Abdullahi Amasa, for sacrificing so much for a cause in which he believes. His preference for obeying Almighty Allah instead of pleasing ordinary mortals and his choice of al-Akhirah (the Hereafter) over and above this ephemeral world gave birth to the resilience manifested by his daughter’’.

The group urged female Muslim law students who are already accustomed to using hijab to continuing wearing it without nursing any fear of persecution, noting that Hijab was an Allah-given fundamental human right of every Muslim woman.

MURIC appealed to Muslims throughout the country to be humble in victory, ‘’to seek no vengeance, to avoid issuing provocative statements and to pray for a brilliant and successful law carreer for Amasa Firdaus”

It would be recalled that the young Lawyer was barred from being called to bar at the last ceremony in December last year, when she declined to wear off her Hijab as directed by the officials of the Nigeria Law School. The development has since yesterday attracted public attention, including the House of Representatives which once called for public hearing on the matter.