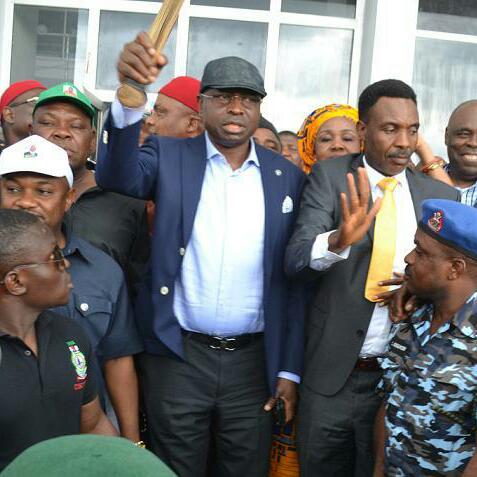 (AFRICAN EXAMINER) – Former chairman senate committee on works, Senator Ayogu Eze, was on Saturday received in a heroic manner by over twenty  thousand teeming supporters and political associates who trouped out to the  Akanu Ibiam International airport Enugu, to accord him a rousing welcome on arrival from Abuja, Nigeria’s capital.

It was gathered that Senator Eze, an arch opponent of the incumbent Governor of Enugu state , chief Ifeanyi Ugwuanyi, was returning to Enugu his home state  for the first time since he defected from his former Peoples Democratic Party PDP, to the ruling All progressive Congress APC sometime in August this year.

Our Correspondent reports that it was a hectic task for security operatives to control the overwhelming crowd that were at the airport to receive the former member of the upper chamber of Nigeria’s National Assembly NASS.

Meanwhile, there are strong indication that the two time senator who was accompanied by the Enugu state chairman of APC, Dr Ben Nwoye, a former member of House of Representatives, Barrister Kanayo Oguakwa among  other party chieftains may likely be the one to fly the APC’s flag in the 2019 general election.

As soon as the crowd which was mainly adorned in white branded T-shirts bearing Eze’s photograph, with very bold inscription, ‘Sure Mandate, Senator Ayogu Eze for Governor’ sighted him, they went into frenzy, chanting of solidarity songs for him.

Addressing the mammoth crowd, Eze expressed appreciation to them for coming out to receive him and promised not to let them down.

The lawmaker, who represented Enugu North senatorial district for eight years, said he would soon release a manifesto to usher in peace and development in Enugu State, appealing to his supporters to avoid trouble as Enugu was not known for trouble.

He said: “we have to cooperate amongst ourselves for the purpose of development in Enugu State,”

“Today is not a speech making day.  I want to let you know that I will not let you down.

“We will unfold our plans in due course. As you go home, do not make trouble because Enugu is a peaceful State”, he added

After the airport reception, he later moved in a long motorcade from the airport, passing through major streets of Enugu metropolis, to his residence at Independence layout Enugu.

African Examiner recalled that Eze’s rivalry with Ugwuanyi dated back to the 2015 parallel governorship primaries of PDP in Enugu State, which both politicians claimed to have won.

The PDP National Executive eventually upheld Ugwuanyi as the candidate and he eventually won the 2015 governorship election in the state.

Eze however, dragged Ugwuanyi to court and the prolonged legal battle ended in July this year when the Supreme Court ruled in Ugwuanyi’s favour.