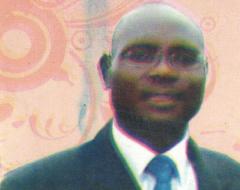 The incident which occurred at about 11pm on Thursday also saw the assailant stabbing the dead man’s son, Folarin, and his mother-in law.

Eye witnesses said the assailant who was arrested and is now at the Olowosokedile Police Station may have gained access into the legal luminary’s home by scaling the fence and had attacked Folarin who had opened the door to switch off the electricity generator.

The boy who received severe wounds on his head and his right wrist had ran inside to alert the father to the presence of the intruder.

The assailant was claimed to have insisted on the amount and threatened somebody would die if the amount is not immediately brought out.

He thereafter began to engage the late Fadipe in a brawl stabbing him with the butchers’ knife and a kitchen knife obtained from the late lawyer’s kitchen.

The assailant was reported to have had a better access to stabbing the lawyer, when the latter wrestled him to the ground while defending his mother-in law from being stabbed to death.

He said he received the alert at about 12am and that the police has since commenced investigation into the incident.

Meanwhile prominent Nigerians among them the Chairman Ifako Ijaiye Local Government Hon. Oloruntoba Oke was among early callers at the house of the late legal luminary yesterday.