I’m in APC Because Jonathan is victimizing Rivers State -Amaechi 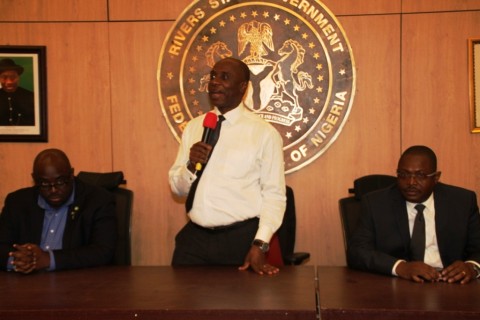 Rivers State Governor and Chairman of Nigeria Governors’ Forum, Rt. Hon. Chibuike Rotimi Amaechi has again given reasons why he left the Peoples Democratic Party (PDP) for the All Progressives Congress (APC). 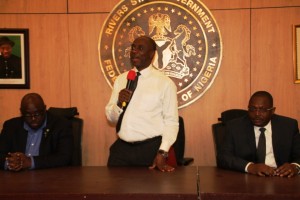 Amaechi said he joined the APC to protect the interests of Rivers State which have been neglected by the PDP federal government.

He said the state suffers neglect and victimization in the absence of federal government projects in the state and the ceding of oil wells in the state to the president’s home state, Bayelsa.

He urged people of the state to be politically conscious and become agents of progressive change to vote out the ruling PDP at the Federal level.

Governor Amaechi spoke while having an interactive session with medical doctors in the state in Port Harcourt on Thursday.

Amaechi said APC holds the light to the country’s rapid development. He also said the party is the alternative to the PDP to reduce general impoverishment in the country.

He said one of the reasons for his disagreement with the Federal Government is over the Soku oil wells in Rivers State which were ceded to Bayelsa state and which the Rivers State government contested in court.

“So for Rivers State, basically that is the cause of the quarrel and you have a choice to make. The choice for me, if you ask me to advise you, is to vote out PDP and there is no sentiment about that.”

“Legally, we have not lost Soku (oil wells). We have just lost Soku to the fact that the President is from Bayelsa. When a president that is not from Bayelsa comes, he will look at the facts and the facts are there. The Federal Government in writing in the court said to court, ‘sorry, court, we made a mistake, we will correct the mistake’ and we have told Federal Government, ‘don’t call us for a meeting, go and correct that mistake. How could you people wake up in 2011, suddenly changed the map of Nigeria and take Soku into Bayelsa State!”

Amaechi said the Jonathan administration has failed to execute a road project awarded by the Olusegun Obasanjo administration to link the oil-rich Bonny Island in Rivers State.

“That road to Bonny was awarded by former President Olusegun Obasanjo. They started, they’ve done just one bridge. The road has been abandoned. Yar’Adua tried to restart it but he stopped. President Goodluck Jonathan has forgotten about that road completely despite the fact that part of the money that feeds the Nigerian economy comes from that place, Bonny. That’s where you have the natural gas plant.”.

He also disclosed that the federal government has not reimbursed the State for the N105 billion spent on the Port Harcourt-Owerri Federal Road and Eleme and Agip flyovers in the state among others.

On his government’s bid to secure loan to provide potable water for Rivers people, Amaechi said the loan is been held up because of the challenge posed by the minister of finance who has not signed off on the loan.

“I will start from water, we got African Development Bank (ADB) and World Bank to give us a loan for which we will pay 0.4 per cent for 40 years which is a wonderful loan and we said to give Port Harcourt people water first. If everybody in Rivers State is drinking (potable) water, that will reduce the number of patients that go to Braithwaite Memorial Hospital or any other hospital. World Bank agreed, Federal Government agreed, ADB agreed, they said, go and do due process. We have finished due process. What is remaining is for Minister of Finance to just sign off.  In fact, you know, like I tell people, I have no appetite for money, they can award the contract to whoever they want, all I want is water because that will impact in other sectors of the Rivers State economy. ‘Oh, you are quarrelling with the president, we will not sign,’ that is why they have not signed”, he said.

He reiterated that his decision to join the APC is not for his personal interests but for the state. He urged the people to discourage politics based on tribe or region and play politics for the collective interests of the people.

“It is not about Ijaw, it is not about South-South because the first question I will ask myself is ‘what have I benefitted in the government of President Goodluck Jonathan?  We gave him between 1.5 million to 2.1 million votes. What have we gotten?  What has the federal government done for Rivers people?”.  ‘Nothing,’ the people chorused.

He decried the grounding of the Rivers State aircraft by the federal government and its refusal to sign to allow the state bring in two surveillance helicopters from the United States to check kidnapping and other crimes.

Amaechi said his critics in the state have been annoyed with him for his refusal to be corrupt. He also said the state police commissioner is influenced in his actions by the presidency.

In his remarks, the State Chairman of the Nigerian Medical Association (NMA), Dr Ibitrokoemi Korubo assured the governor that they would continue to support his good policies in the state. Others who spoke equally commended him for his good governance and initiatives.