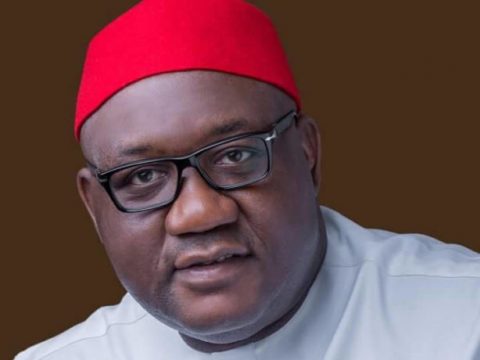 (AFRICAN EXAMINER) –  –  A member of the National Assembly, Sen. Benjamin Uwajumogu, has urged political leaders and other stakeholders to promote only interests that would unite the country.

Uwajumogu, who represents Imo North Senatorial District at the Senate, said that all leaders, including traditional rulers, must prevail on young people to desist from creating discord in the country.

He said in Abuja on Thursday that actions and utterances of youths in some sections of the country were capable of creating strife.

He cautioned that the country could not afford any civil crisis, and therefore, said that all hands must be on deck for the nation to pull through current “temptations”.

The lawmaker, however, called for restructuring of the country to enable the issues engendering agitations to be fixed.

He sued for understanding from all sections, saying that the country could not go through another civil crisis.

“We may have to restructure this country in a full regional or quasi-regional confederation. There must be some kind restructuring of Nigeria,” he said.

Uwajumogu commended recent call by the Senate on the Presidency to submit report of the 2014 National Conference for consideration, adding that it would aid finding lasting solution to the problems.

“The issue on the front burner currently is unity.

“We find ourselves in a situation where a group of people can arrogate themselves the powers to ask an entire component of a nation to get ready to leave their own part of the nation.

“They issued a three-month ultimatum. I think that is the height we have ever reached in this country.

“Even during the civil war, before and after the civil war, no group had ever given that kind of ultimatum to any other component of this federation.

“To say the least, we are disappointed and it is a terrible thing that has happened. I’m also happy that the Federal Government has stepped into it.

“I wish that the Federal Government has also arrested these youths for making such a speech,” he said.

The lawmaker pointed out that the day a tribe could tell another tribe that it was unfit to live in its part of Nigeria, “then we need to really do something about it”.

He said that some mischief makers had continued to give the impression that the 1966 putsch was an Igbo arrangement, and explained that it was a strictly military matter carried out by not only Igbo officers.

He called on South-East lawmakers and leaders to meet and agree on the way forward, adding that leaders of other zones in the country should do same to avert crisis.