Ihejirika Harps on Prudent Management of Funds by Heads of Establishments 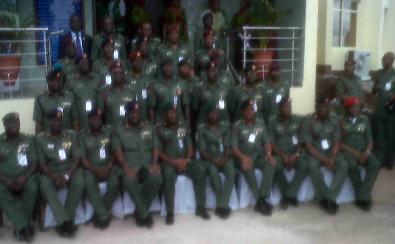 Nigeria’s Chief of Army staff COAS, Lt Gen. Azubuike Ihejirika
has stressed the need for prudent utilisation of public funds in
government agencies by heads of organisations, saying it
remains the only way to achieve meaningful feat in any
establishment.

According to the Army helmsman, for any organisation, be it in
a developed or developing nation to record any reasonable
achievement, leaders of such outfits must always make prudent
management of resources their watch word.

The Army boss, who stated this on Thursday while
commissioning the newly refurbished ultra-modern senior
officers mess  of the 82 Division of the Nigerian Army  building
Enugu, said “one thing is to make  funds available, another
thing is to utilize such fund properly”

He however, expressed satisfaction with the General Officer
Commanding GOC, 82 Div, Major General Adebayo Olaniyi, for
prudent management of funds for the project which meets
international standard.

General Ihejirika, said he was elated with quality of the mess
which is fully equipped with sophisticated furniture and
electronic gadgets.

He stated that his administration decided to embark on
aggressive infrasturcutral development since he took over
mantle of leadership, because he “inherited a decay and sorry
state of infrastrucure in the Army.”

All programmes initiated by the Army according to him, are
designed with a view to falling in-line with president Jonathan’s
transformation agenda, just as he described  himself as the
most fortunate COAS the nation has ever produced.

He assured that the Army would continue to embark on
human oriented projects.

The Army chief further disclosed that the ongoing ultra-modern
hotel being constructed by the 82 Division under the public
private partnership PPP arrangement has reached advanced
stages.

In his brief remarks, the 82 Div. GOC, General Olaniyi, who
described the Army chief as a visionary leader, thanked him for
his support and encouragement towards realisation of the
project.

He assured that the Division would continue to promote the
COAS vision aimed at taking the nation’s Army to a greater
height.