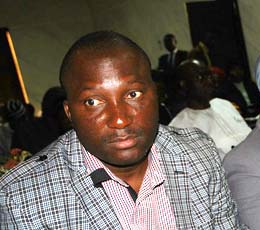 The immediate past Deputy Speaker of the Plateau State Assembly and Member representing Shendam Constituency, Hon. Johnbull Shekarau has dragged all his 23 colleagues to court for removing him as deputy speaker.

African Examiner recall that the former deputy speaker was impeached on the 9th, October 2013, after the resignation of the then embattled speaker, Rt. Hon. John Clark Dabwan. The House replaced the deputy speaker with Hon. Joyce Ramnap.

However, Plateau State High Court1, presided over by the State’s acting Chief Judge, Justice Pius Damulak, has served a hearing notice on each of the 23 members of the House notifying them the date of hearing, which is slated for 4th, March 2014.

A copy of the notice of hearing and the originating summons made available to African Examiner, ordered the 23 Lawmakers to enter appearance within 8 days of receiving the summon.

Questions for determination in the suite filled on behalf of the former deputy speaker, by Barr. B. S. Ngyou, are; whether the deputy speaker can be removed or impeached without compliance to the provision of sections 92 and 98 of the Nigerian constitution?

Shekarau is asking the court to declare that his impeachment was unconstitutional, null and void, the impeachment be set aside and he should be returned to his former seat and his rights and privileges as deputy speaker be restored.

Meanwhile the State House of Assembly has acknowledged receipt of the summons.

It would also be recalled that the House had accused the former Deputy Speaker of high handedness, and arrogance as grounds for his removal.