Impeachment: Gov. Nyako Begs Atiku And Others To Intervene 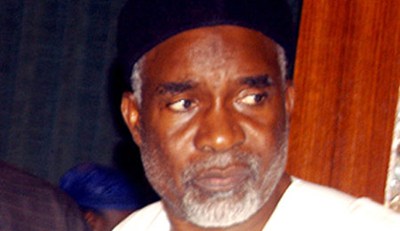 The Adamawa State governor, Admiral Murtala Nyako and his Deputy, Mr James Bala Ngilari were yesterday said to be in Abuja, begging to be saved from impeachment by members of the state House of Assembly.

The House, Wednesday accused the Nyako and Ngilari of gross misconduct in its notices of impeachment on the two leaders. The notices, it was gathered would now be served through substituted service.

However, this was even as the Adamawa State government yesterday said that the Economic and Financial Crimes Commission, EFCC, had frozen its accounts in all the commercial banks in the country.

Nyako was said to have visited Atiku along with to the former Chairman of the EFCC, Mallam Nuhu Ribadu and the Chairman, Adamawa State chapter of the All Progressives Congress, APC, Hon. Binta Koji.

Sources told Saturday Vanguard that the trio went into a closed door meeting soon after the governor arrived the former Vice President’s residence.

Atiku, who travelled to South Africa for the inauguration of the country’s parliament, returned to the country at about 7 pm yesterday ostensibly to also play a fatherly role in the matter.

It was gathered that Atiku would beg the legislators to sheathe their swords by saving the jobs of both the governor and his deputy.

”Where this fails, we hope that the former vice president will ask his loyalists to withdraw their signatures. Once he does that, the impeachment process will collapse because the requisite number for it to continue will have been lost,” a source close to the meeting said.

According to the source, both Nyako, Ngilari and the legislators were in Abuja for the reconciliation meeting.

Apart from Atiku’s alleged intervention, it was also gathered that the Northern Nigerian Governors’ Forum, NNGF, also met to resolve the issues at stake and save him from being impeached just as the Senator representing Taraba North, Senator Aisha Jummai Al – Hassan reportedly called a meeting of senators from the North East to intervene in the matter.

However, the Adamawa State Commissioner for Justice, Mr Ibrahim Tahir, told newsmen in Yola yesterday that the EFCC had written the state to the effect that it had frozen all the bank accounts of the state government in commercial banks.

The EFCC said it ‘’froze the accounts as a precautionary measure to safeguard the state treasury amid evidence of barefaced looting uncovered in an on- going investigation.”

“In the course of investigation, a critical analysis of local government accounts revealed massive cash withdrawals,’’ it said last night.

The government further said that apart from freezing the accounts, the Presidency had also ordered securitymen to monitor Nyako’s movements.

Members of the Adamawa State House of Assembly, Tuesday, gave impeachment notices to both Nyako and Ngilari over alleged fraudulent activities running into several billions of Naira.

Following the impeachment notices, all the legislators in the House had relocated to Abuja along with Nyako and Ngilari, as efforts were being made by elders from the state to resolve the issues amicably.

In 2008, the governor faced similar impeachment threats from the legislators but the matter was later resolved.

However, following Nyako’s alleged penchant to tackle political gladiators from the state, he was alleged to have lost the political good will of most leaders, especially within the ruling All Progressives Congress, APC, and the opposition People’s Democratic Party, PDP.

Among the political leaders who had at one time or the other quarrelled with Nyako include the former Vice President, Atiku Abubakar, former Military Administrator of Lagos State, Brigadier General Buba Marwa and his erstwhile political god-father, Senator Jibril Aminu as well as former National Chairman of the PDP, Alhaji Bamanga Tukur.

As a result of the development, most of the political leaders in the had supported the impeachment of both the governor and his deputy to pave the way for another election within three months.

Meanwhile, the Director of Press and Public Affairs at the Adamawa Government House, Yola, Ahmad Sajoh, has blamed the Presidency over the political tension in the state, saying that it had ‘’exposed the desperate efforts by President Goodluck Jonathan to witch hunt officials he perceived as enemies even if it means subjecting the electorate to hardship.’’

According to Sajoh, the closure of the government’s accounts would affect workers as salaries would be delayed just as other social services especially would be disrupted during the Ramadan fasting.

‘’President Jonathan has made it clear that the impeachment plan against Gov. Murtala Nyako must sail through and has also mandated security agents to be on the trail of the governor, who will

immediately be arrested by the EFCC once he is impeached and he loses his immunity,” he said.

Nyako who was said to have been disallowed from travelling to Abuja by flight on Thursday, traveled by road to attend the peace meetings.