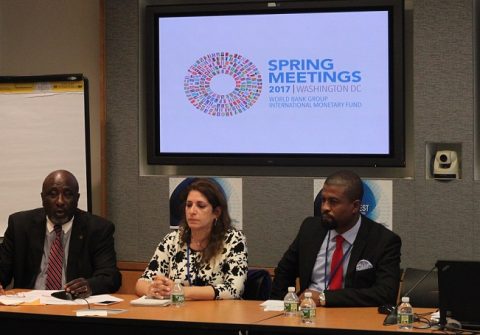 At the 2017 World Bank/ IMF spring meetings, a human rights group, African Internally Displaced Persons Voice Foundation has made a strong case for an action plan that will help protect internally displaces persons, not only in Africa but around the world.

The executive director of the group, Oluwatobi Ogunbayo made the call last week when he addressed the high powered meeting of the 2017 World Bank/IMF spring meeting in Washington, DC., disclosing that there are estimated 40 million people that are displaced from their homes through armed conflict in Africa, Middle East, Asia and Latin America.

The action plans, according to him, should spell out concerted efforts to resettle and reintegrate the IDPs back to their homes.

Other speakers at the event also agreed that to end poverty, the IDPs population need to be urgently resettled and integrated back into their communities.

Speaking at the occasion, Major General Nuhu Angbazo, chief of civil military affairs who represented the Chief of Army Staff of the Federal Republic of Nigeria enumerated several successes achieved under the President Buhari led government to defeat the insurgency.

He noted that though no directive has been issued to return the IDPs back to their communities but the Military has provided a strong security architecture for those returning to their homes and to further to deter such displacement in near future.

Other recommendations made at the end of the forum are:

“Proper coordination of all national laws on IDP under the Global protection working group (GPWG) with a mandate to enhance the capacity of  all actors to address the protection needs of IDPs.

“Implementation of the Kampala Accord on IDPs and domestication at national levels in all African Countries.

“World Bank should sponsored quick impact assessment projects targeted at IDPs and enforcement of restorative justice for abused people in IDP camps with a view to making  countries, individuals or military personnel accountable.”