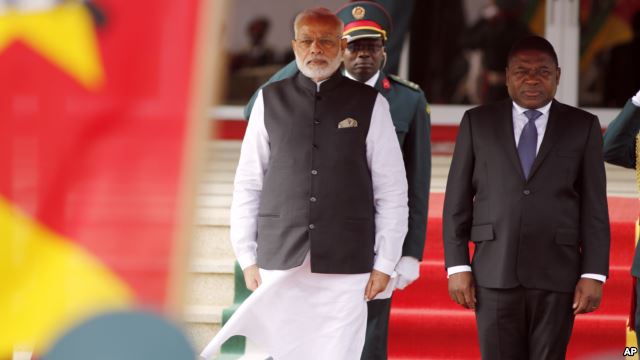 MAPUTO, MOZAMBIQUE — India’s prime minister has kicked off a four-nation African tour on a continent where China’s presence has been strong, including countries that haven’t been visited by an Indian leader in more than three decades.

Modi goes next to South Africa, Tanzania and Kenya.

India’s foreign ministry has described the four countries on the Indian Ocean as economic gateways to landlocked African states. Mozambique alone receives almost a quarter of India’s investment in Africa, according to India’s government.

Several agreements are expected to be signed with each country, the foreign ministry said, and energy and food security will be key issues. Mozambique soon will be the world’s third largest exporter of natural gas after Qatar and Australia, the ministry said.

A long-term agreement to import pulses from Mozambique is expected to be signed on Thursday. India has been trying to control the prices of pulses, a staple diet for millions of its poor, which have doubled in the past 18 months because of two successive drought years.

South Africa, which lists India as its sixth-largest trade partner, is another key stop for Modi.

In Durban, South Africa, Modi is expected to take a brief train journey to commemorate Indian independence leader Mohandas K. Gandhi, whose experience with racism while living in South Africa as a young man shaped his resistance to segregation with nonviolent protest