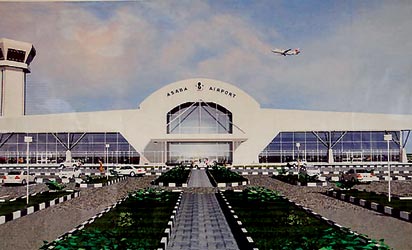 Indigenes of  Asaba, the state capital  of Delta State, have kicked against the naming of Asaba airport after former late Nigeria’s first lady, and wife of ex- military president, Mariam Babangida, by the state government.

Instead, the people canvassed for naming of the airport after the late Premier of Mid-Western region, Chief Dennis Osadabey.

The community made their position known when the Asaba Development Union Enugu branch, held its end of the year 2013 celebration, awardsof excellence and bestowing of post humous award on the late leaders of the community Tuesday in Enugu.

The people are also demanding for reparations from Nigeria government for the alleged mass killings  of its people, especially the infant male children that were massacred by the Nigeria armed forces during the Nigeria civil war that ended 43 years ago. 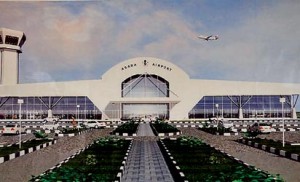 The Asaba community is also insisting that they must retrieve all their property lost during the pogrom, while it makes efforts to restore Asaba language and all its lost heritage.

They decried the 1967-1968 genocide of the people of Asaba in particular and the entire Western Igbo by the Nigeria army for fightingon the side of the defunct Biafra republic, stating that it was high time the federal government paid reparations for the mass murder where over one million people, mostly infant, adolescents and adults males were murdered in the western coastal communities and emptied into the River Niger.

Making the demands on behalf of the community , renowned Journalist and author of the popular book ‘Blood on the Niger’, Ogbueshi Emma Okocha, said that the people of the Western Igbo suffered the saga and dilemma because of their geographical placing.

Okocha recalled that no fewer than 1500 Igbos were massacred on house-to-house search in Benin with over 700 male Igbo lined up and shot in Asaba and another 5000 Igbo killed in Warri within the same period of holocaust.

He however, urged his people and the entire Igbo to pursue the reparation and recovery of their lost heritage with all their might, noting that the late Premier of the defunct Mid-Western region founded the Igbo union by 1939 for the unity of the Igbo nation.

Bishop Emmanuel Olisa Chukwuma, the Anglican Bishop of Enugu Diocese who is an indigene of Asaba, had also canvassed support for naming of Asaba Airport after Osadabey to immortalize the late sage.

The Bishop said “There is no controversy because Osadabey is a senior person and contributed much in the development of Delta State, defunct

Bendel and Mid-Western states before Mariam.

“Any other thing can be named after her but not the airport because in the sequence of political leaders, Nnamadi Azikwe, Ahmadu Bello and Akanu Ibiam are not in the category of Mariam Babangida but Dennis Osadebey falls in that category”.