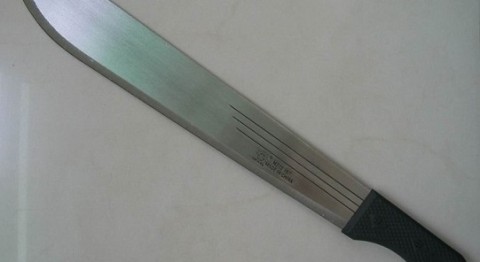 A 45 year old man, Mr. John Ohuonu was on Friday arraigned before an Umuahia North Chief Magistrate court 3 for allegedly attacking and shopping- off the palm of one Mr. Irechi Abel, whom he is accusing of  dating  his wife. 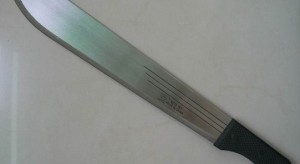 According to Mr. Ohuonu, Abel has been having extra-marital affairs with his wife Blessing Ohuonu (John’s wife) and was alleged to have been sleeping in the man’s house at Umuagu village in Obingwa Local Government Area of Abia State with the woman whenever the husband was out of town.

Said Ohuonu: “on October 20, 2013, I caught Abel and my wife (Blessing) making love in my house” a sad experience that forced him to allegedly attacked the former with a machet, inflicting various degrees of injuries on his body, as well as chopped off his left palm.

However, the unfaithful wife was not spared in the attack, as the husband also inflicted serious injuries on her body while she was trying to protect her lover in the fight.

African Examiner gathered that shortly after the fight broke out, some policemen arrived the scene and arrested Ohuonu, as well as took the cut -off palm to an undisclosed morgue where it was deposited as exhibited.

The security operatives according to a source also took Blessing, the lover woman, to the Seventh Day Adventist [SDA] Hospital along New- Umuahia Road, Ogbor Hill, Aba where she is still receiving medical attention

In a two count charge , John was accused of willingly and unlawfully attempted to kill Abel when he cut off his left palm from the wrist and inflicted several machete cuts on him, an offence said to be punishable under section 320 of Criminal Code, Cap. 38, Laws of the Federation of Nigeria 2004 as applicable in Abia State.

The second charge read thus; “That you John Ohuonu ‘male’ on the same date and place in the aforesaid Magisterial District, unlawfully did grievous harm to one Abel Irechi ‘m’ by cutting off his left hand from the wrist with a machete and also giving him several machete cuts on his left shoulder, right leg, left ribs and other parts of his body and you thereby committed an offence punishable under section 335 of the Criminal Code, cap.38, Laws of the Federation of Nigeria 2004 as applicable in Abia State”.

After pleading not guilty to the charges, Counsel to the accused, Nath Ikeocha, had, applied for his bail.

The presiding Magistrate, Mrs. E.K Uma however granted him  bail in the sum of one hundred thousand naira (N100, 000) with two sureties in like sum, one of whom must be a civil servant of not less than level 10 and a resident in Umuahia North LGA.

Meanwhile, the case was later adjourned to December 4, 2013 for further hearing.