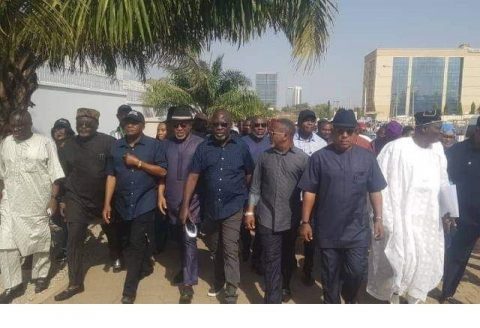 (AFRICAN EXAMINER) – The leadership and members of the Nigeria’s main opposition party, the People’s Democratic Party (PDP) in the National Assembly (NASS) on Friday, protested at the embassies of the United States (US) and the United Kingdom (UK) in Abuja.

The party’s Leader disclosed that their presence was to present protest papers to the embassies.

Secondus hit President Muhammmad Buhari, alleging that the President has lost control of the security of the country, therefore should resign.

The PDP Leader similarly alleged that the judiciary and the legislature have been compromised.

In line with this, Secondus cited the January 14 Supreme Court ruling which sacked former Governor of Imo State Emeka Ihedioha of the PDP and declared Senator Hope Uzordima of the ruling All Progressives Congress (APC) as the winner.

The party however suspended its planned protest to the European Union (EU) embassy.