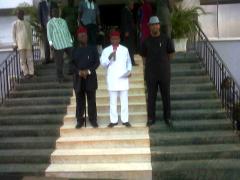 Against the backdrop of current alarming insecurity challenges facing Nigeria, states in south- east zone of the country have agreed to jointly purchase security equipments for the area.

The states are Imo, Anambra, Ebonyi, Enugu and Abia.

To this end, the zone said it has received quotation from a vendor of international repute for the supply of the equipment.

Chairman of south east governor,s forum, chief Thoedore Orji, disclosed this to newsmen on Sunday shortly at the end of their marathon meeting in Enugu.

Orji, who is the Abia state Governor, said the present insecurity situation in Nigeria had remained a source of worry to the forum.

However, a two page communique read to reporters by the chairman stated thus: “the forum agreed that the leadership of the forum should be rotational for one year in alphabetical order of state names”

“The forum also agreed that south East stakeholders meeting should be convened after the National conference” with a view to looking into other matters of interest to the zone.