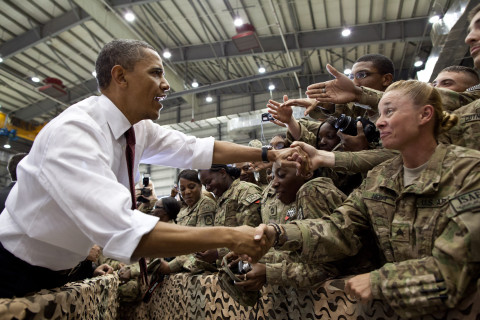 United States (US) President Barrack Obama has endorsed dispatch to Iraq about 300 armed American forces, positioned in and around the country to help secure US assets just as he considers other options for combating the insurgents. Among likely options to be deplored include airstrikes, use of drone or a contingent of Special Forces.

The US and Iran have held an initial discussion on how the longtime foes might cooperate to stem the threat from the militants that have swept through Iraq. Still, the White House doubts possibility of Washington and Tehran on joint military operations in Iraq.

Obama met with his national security team Monday evening to discuss options for stopping the insurgents referred to as the Islamic State of Iraq and the Levant (ISIL). Officials said President Obama has not made final decision on how aggressively the US might get involved in current Iraq crisis, though the White House continued to emphasize that any military engagement remained contingent.

Still, there were unmistakable signs of Americans returning to a country from which its military fully withdrew more than two years ago. Obama notified Congress that up to 275 troops would be sent to Iraq to provide support and security for US personnel and the American Embassy in Baghdad. The soldiers – 170 of which have already arrived in Iraq, were armed for combat, though, President Obama has insisted he did not intend for US forces to be engaged in direct fighting.

“We are hard-wired into their system, the fledgling democracy that America helped institute, We can’t walk away from it.” said Ryan Crocker, a former U.S. Ambassador to Baghdad.

About 100 additional forces are being put on standby, most likely in Kuwait, and could be used for airfield management, security and logistics support, officials has said.

On drone option, African Examiner sources indicated that US Secretary of State, John Kerry said on Monday that drone strikes could be used. AE gathered that a Washington’s top diplomat told Yahoo News, that  Drones might not be the “whole answer, but they may well be one of the options that are important to to stem the tide and stop the movement of people who are moving around in open convoys and trucks and terrorizing people”.