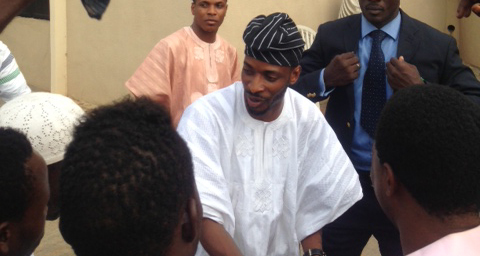 Adegbola Adigun ‘9ice’ Abolore Akande has kicked off his political career in Ogbomosho, Oyo State with a massive crowd storming the venue of the campaign. 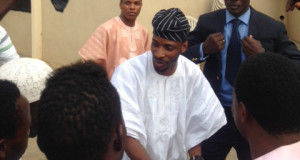 The musician turned politician visited Ogbomosho Town Hall, Oja Igbo on Wednesday 10th 2014 to address the indigenes of the city on his ambition to represent Ogbomosho North /South & Orire at the Federal Constituency 1 under Action Progressive Congress (APC).

“I’m in Ogbomosho to tell my people that I’m an indigene of the town.  I’m contesting for House of Representatives in Ogbomosho North /South & Orire at the Federal Constituency 1. This is for real. I’m here to change the life of my people. Politics shouldn’t be a platform to embezzle money.

He also visited APC elders in the city in order to show his real ambition. Immediately he stormed Ogbomosho, he paid a courtesy visit to Chief Bukola Badmus, Chief Ayanlola, APC Chariman Ogbomosho, Chief Mafolashere Abdul Rasheed, and Prince Abass, Baba Osa.  After the campaign, he visited Oja tuntun to see Chief Bello Noah another leader of the party in Ogbomosho.

9ice is however preparing for APC House of Representatives Primary coming up on 22nd November 2014.