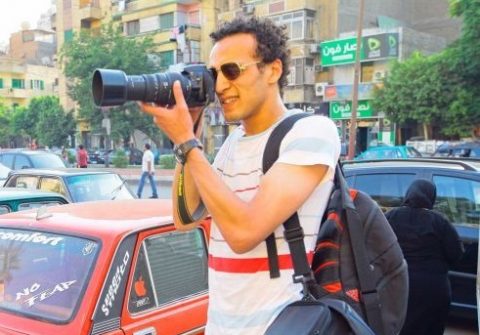 (AFRICAN EXAMINER) – Mahmoud Abu Zeid, a photojournalist who has been in jail for nearly five years after being arrested for covering a demonstration in Cairo, has won the 2018 Press Freedom Prize.

According to the Educational, Scientific and Cultural Organisation (UNESCO), Zeid was selected to receive the 2018 UNESCO/Guillermo Cano Press Freedom Prize, the UN agency said.

An independent jury of media professionals selected Zeid, known as Shawkan, for the prize.

The prize would be awarded on May 2, to coincide with World Press Freedom Day, UNESCO said.

“The choice of Mahmoud Abu Zeid pays tribute to his courage, resistance and commitment to freedom of expression,’’ Maria Ressa, President of the jury, said.

According to UNESCO, Zeid has been in jail since Aug. 14, 2013, when he was arrested while covering a demonstration at Rabaa Al-Adawiya Square in Cairo.

In early 2017, the prosecutor in his case reportedly called for the death penalty.

His arrest and detention had been deemed arbitrary by the UN Working Group on Arbitrary Detentions and contrary to the rights and freedoms guaranteed by the Universal Declaration of Human Rights and the International Covenant on Civil and Political Rights.

The 25,000-dollar prize recognises a person, organisation or institution that has made an outstanding contribution to the defence or promotion of press freedom, especially in the face of danger.

It is named in honour of Guillermo Cano Isaza, a Colombian journalist, who was assassinated in front of the offices of his newspaper, El Espectador, in Bogotá, on Dec. 17, 1986.

It is funded by the Cano Foundation (Colombia) and the Helsingin Sanomat Foundation (Finland).

UNESCO would lead the 25th celebration of World Press Freedom Day next week in Accra.

The global theme for 2018 is: “Keeping Power in Check: Media, Justice and The Rule of Law”.

The theme covers issues such as media and the transparency of the political process, the independence and media literacy of the judicial system and contemporary challenges of ensuring press freedom online.

Zeid, who is still in detention and more than 700 other people, face many charges, which include belonging to the banned Muslim Brotherhood, possessing firearms and murder.

He will have a hearing on April 24, (today), but no verdict is expected. If convicted, he could face the death penalty.

He denies all charges, his lawyer, Karim el-Rady said.

International rights organisations, including Amnesty International and The Committee to Protect Journalists, have repeatedly denounced Shawkan’s imprisonment and urged the Egyptian authorities to drop charges against him.(NAN)