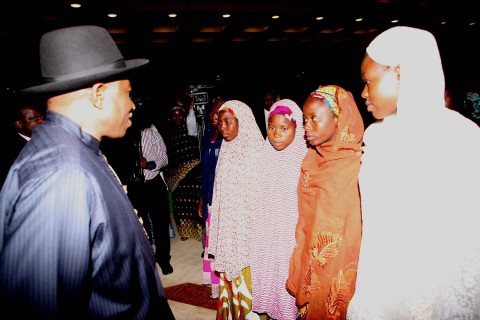 As a follow up to the aborted meeting last week and to make good his promise to the Pakistani teen, Malala Yousafzai, President Goodluck Jonathan is currently in a closed door meeting with the parents of the abducted Chibok Secondary girls and 51 of the abductees who escaped from the captivity of the dreaded Boko Haram insurgents. 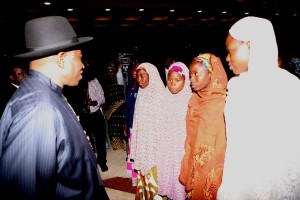 African Examiner gathered from the Presidency that the parley holding at the Presidential Villa which has been repeatedly speculated also has in attendance top government functionaries such as Senate President, David Mark, and Governors Kashim Shettima of Borno and Isa Yuguda of Bauchi as some members of the Federal Executive Council.

The meeting which was aborted last week has drawn confusion, contradictory statements from various quarters, accusations and counter accusations from the Chibok community, the parents, Bring#BackOurGirls rally leaders, opposition and Federal government officials.

The rescheduled meeting between President Goodluck Jonathan, parents of the abducted Chibok Secondary school girls and 51 abductees who escaped from Boko Haram insurgents has ended in Abuja with promise that the girls would be rescued safely and alive.

President Jonathan who promised to meet with the representatives of the parents while receiving the Pakistani teen child education, Malala Yousafzai last week promised that Federal Government would build more befitting schools in the community and the education of the abducted girls would be taken care of.

The meeting was  held in the banquet hall of the Presidential Villa in Abuja.