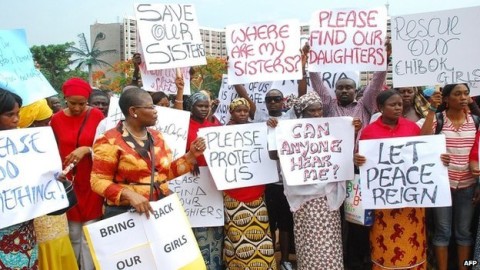 Just as the campaigners for #BringBackOurGirls are planning nationwide protest to mark 100days of abduction of over 200 school girls, President Goodluck Jonathan will meet the parents of the girls abducted in Abuja on Tuesday.

The reschedule meeting with parents of the abducted girls is coming the same day, one of the prominent mobilizers of BringBackOurGirls, Oby Ezekwesili will be guest on BBC Hardtalk to discuss issues relating to abduction of the girls and terrorism in Nigeria.

The meet is to fulfill President’s promise to 17-year-old girl Pakistani girl-child education campaigner, Malala Yousafzai when she met with him during her three-day visit to Nigeria.

African examiner learnt that some of the girls who escaped from their abductors will also attend the meeting.

The parents and escaped girls shunned last week meeting as they returned to Borno State early in the morning of the same day after meeting with the Pakistani girl.