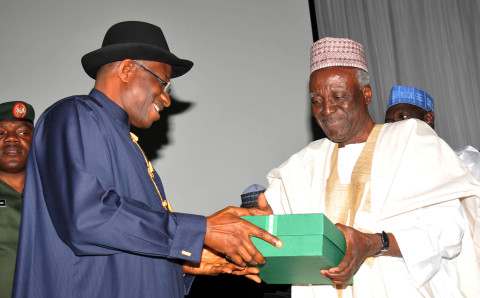 President Goodluck Jonathan has formally received the 10,000 pages, with 600 resolutions of the just concluded National conference 2014 report with promise to implement to the letter its recommendations. 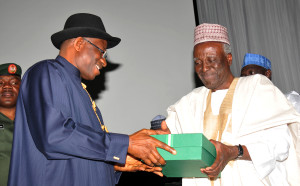 The presentation took place Thursday at the National Judicial Institute (NJI) during the formal closing of the conference which started over four months ago.

Jonathan who received the report from the CONFAB’s Chairman, retired Justice Idris Kutugi, took a swipe on the conference detractors, hence, promised there would not be any untowards attempt on the report. He also pledged the report would be considered by the council of State and passed to the National Assembly.

In the mean time, Mr. President had hailed the Nigeria’s under-20 female Falconets football team, on their qualification for the final match of the ongoing FIFA tournament in Canada.

The President in a statement today by his Special Adviser on Media and Publicity, Dr. Reuben Abati, applauded  the team’s outstanding 6-2 performance against North Korea yesterday.

The President stated as the Falconets prepared for the final match against Germany on Sunday, urged them to put in their best to lift the trophy, so as to become the first in the country and Africa, while assuring them of government’s total support.