The Campaign posters of President Goodluck Jonathan for the 2015 presidential election which flooded every nook and crannies of Enugu city last Sunday, was ON  (Monday) also sighted in several places in Awka, the Anambra state capital. 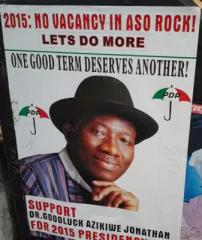 The well designed colorful posters were first noticed by African Examiner at the popular Aroma Junction in Awka with the inscription; “No going back on 2015″.

Though, the source of the posters is yet to be known, but an Awka based civil servant, who do not want his name in print told our correspondent that he saw  some youths pasting them on Sunday night.

He said when they interrogated the young boys, they told them that they were given the job of pasting the posters in Awka city by a politician who is executing it as a project.

Hear him: “You know how this things work? Someone somewhere may be doing this without the knowledge of the president. Though, the president has not openly declared his interest, but his body language shows he will give the race a trial.

Continuing, “But he is not also the type to heat up the polity by pasting posters now. So I believe that one of his supporters may be doing this. That was what the young man whom I saw going around last night and pasting them told us.” Our source said.

However, when our correspondent visited the state secretariat of the Peoples Democratic party PDP to ascertain if the posters emanated from there, it was observed that non was pasted in the premises, just as no official was around apart from the gateman who said he hasn’t seen any body in the office since morning.

Meanwhile, there are speculations that the project is being handled by a PDP stalwart in one of the south east state, who is angling to be president Goodluck Jonathan’s coordinator in the region, come 2015.