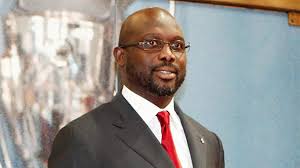 The voting for the contest which was between Weah and the incumbent Vice-President Joseph Boakai ended Tuesday evening.

Following the outcome of the results which are yet to be officially announced, the former international player tweeted from his handle @GeorgeWeahOff:  “I am deeply grateful to my family, my friends, and my loyal supporters who contributed to our campaign during this extremely long election season,”

Weah also tweeted: ”It is with deep emotion that I want to thank you, the Liberian people, for honoring me with your vote today. It is a great hope.

Mr. Weah 51, won the first round, but did not secure the required 50 percent of the vote needed to be declared the winner.

He has been quoted as saying he was hoping that the current contest would be third time lucky.

Reports say Mr Weah’s supporters are in celebratory mood while waiting for the official declaration of  their candidate as the next President of Liberia.