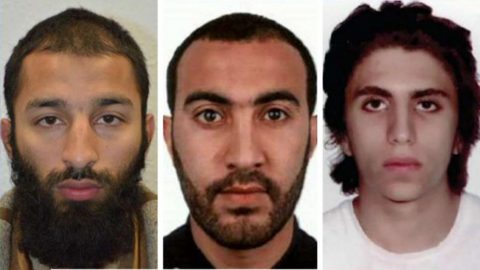 (AFRICAN EXAMINER) – An inquest jury ruled  on Tuesday that police lawfully shot three terrorists after they killed eight people in the London Bridge attack in 2017.

The three ploughed a van into pedestrians on London Bridge before later stabbing people in the area around London’s Borough Market.

Besides the eight fatalities, another 48 people were injured, many  others sustaining serious injury.

All three, who appeared to be wearing suicide vests, were shot and killed by Metropolitan Police firearms officers less than 10 minutes after the attack began in June, 2017.

The inquest jury at the Old Bailey in London heard that the officers shouting warnings and opened fire as Butt, Redouane and Zaghba came at them.

The jury, who deliberated for over three hours, decided that the attackers had ignored clear warning shouts from the police officers.

London’s chief coroner Mark Lucraft directed the jury that the only safe conclusion was that the three men were lawfully killed.

He said none of the witnesses who gave evidence to the jury had criticised the police officers involved. (/NAN)