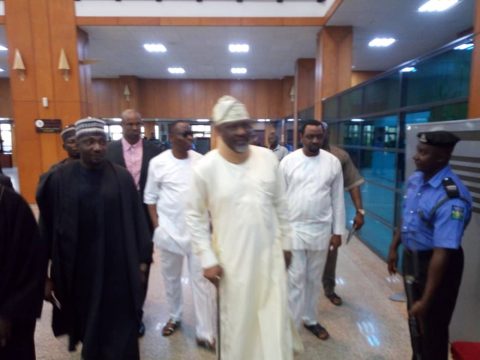 (AFRICAN EXAMINER) – Embattled Senator Dino Melaye representing Kogi West on the platform of the All Progressives Party (APC) made a dramatic appearance at the floor of the Nigeria senate and defected to the People’s Democratic Party (PDP).

He announced his defection on the floor of the Senate even as he asked for a seat to be assigned to him on the side of the PDP senators.

His defection caused confusion as APC and PDP senators exchanged words as APC Senators, Ahmed Lawan, Olusola Adeyeye and Kabiru Marafa questioned Melaye’s method of defecting to PDP insisting that he should not be allowed to sit on the side of PDP senators.

Senate President Bukola Saraki however said that Melaye who appeared in Senate with a neck brace and a walking stick only asked to be assigned a seat where he would be comfortable due to his ill health.

For a while now Melaye has been having political issues with his state governor, Yaya Bello (APC Kogi), the Inspector General of Police (IG), and some senior government officials as well as the presidency.