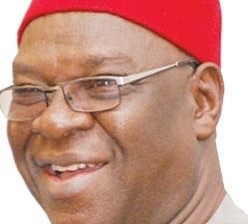 Former Minister of Finance and National Planning, Dr. Kalu Idika Kalu, has denied a recent statement credited to him by one of the national dailies where he was quoted to have said that development in Abia State fell short of the expectations of the founding fathers.

Kalu who made the denial while addressing journalists at his Ebem Ohafia country home, commended Governor Theodore Orji for the developmental
projects he has initiated in Abia since coming on board in 2007 till date.

The former Commissioner for Finance in Old Imo State who maintained that he never scored Governor Orji’s government low in terms of infrastructural development especially as it concerns Aba, said so far he was happy the way Governor Orji has continued to move Abia State forward.

Dr. Idika who claimed that he commented on national issues as regards the general problem of the nation, said at no time did he refer to Abia on any specific issue of development.

“The statement was made in the context of Nigeria’s
development over the last 100 years, but I was completely taken out of context. I did not any way refer to Abia state in particular.

Visibly angry Kalu said that he has very cordial relationship with Governor Theodore Orji that if he had any issue with his administration he would reach him personally not through the pages of newspapers.

“There is absolutely no coma in my relationship with Governor Orji. If I have an issue to discuss with him, I will discuss it personally with him not through the media. The publication may be politically motivated to create rancor between us.

“I have the highest regard for his Excellency because he is up and running to make the state better. In fact if we have time some of us would be coming around to see him and offer our advice and assistance,” he said.

According to him, journalists while reporting should put their reports in proper perspective even as he implored them to always highlight efforts being made
by leaders to develop the country and the states.