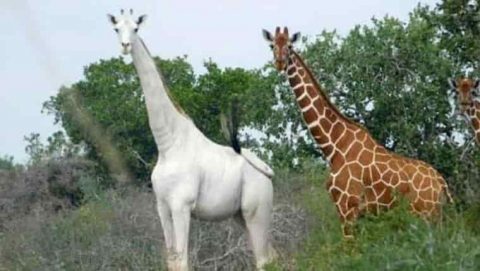 (AFRICAN EXAMINER) – Kenya Wildlife Service (KWS) on Tuesday reported the sighting of a rare white giraffe in a privately-owned conservancy in the north-eastern county of Garissa that neighbours Somalia.

According to KWS, the white giraffe, whose gender had not been verified, was spotted foraging at Ishaqbini Hirola Conservancy in the company of the conventional variety of the tall mammal.

“WOW is pretty much the only way, to sum up, a towering sight like this!

“Spotted earlier today outside the Ishaqbini Hirola Conservancy in Ijara; isn’t this an impressive way to end this month?’’ KWS said in a tweet.

Kenya was on the global spotlight in 2017 when a female white giraffe and her calf were discovered at the conservancy in Garissa County.

However, it was alleged that the two white giraffes were killed by suspected poachers four months earlier when their carcasses were discovered at the conservancy in northern Kenya.

KWS said it was investigating the deaths of the two iconic giraffe breeds amid furore from local and international conservationists.

“Our teams on the ground have seen bones believed to be those of the two giraffes.

“The bones are believed to be four months old,’’ KWS said in March.

The dead calf was born in August 2019, bringing the total of white giraffes in the country to three.

The International Union for Conservation of Nature (IUCN) lists white giraffes as an endangered species that require special protection.