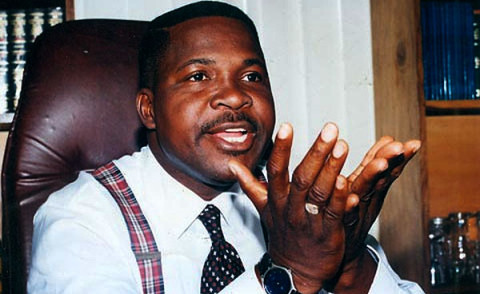 Human rights lawyer, Chief Mike Ozekhome (SAN) has been released by his abductors after spending 20 days in captivity.

It was not clear how much ransom was paid to the kidnappers to release Ozekhome but unconfirmed source said N20 million was paid as ransom, a far cry of the N100 millionmthe kidnappers had earlier demanded.

His release sparked off joy in his Igando residence as  Ozekhome was in deep hug with his wife for several minute.

At a news conference in his Igando home in Lagos, Nigeria,  Ozekhome narrated his ordeal in the hands of kidnappers,  saying that they thought he had millions of naira which he  made in handling election petitions.

He appealed for a special foundation for the training of the  children of the four slained police officers unto the university level.

“My abductors believed that I had made millions in the handling of election tribunal cases,” he said, while appreciating the concerns of the Federal Government and every Nigerian during his captivity.

It could be recalled that Ozekhome, who was kidnapped with his driver and chieftain of All Progressive Congress, APC, Athanasius Ugbome, at Ehor, on Benin/Auchi highway. While
Ozekhome remained in captivity, Mr. Ugbome was released last week after an undisclosed sum of money was paid by his family members.