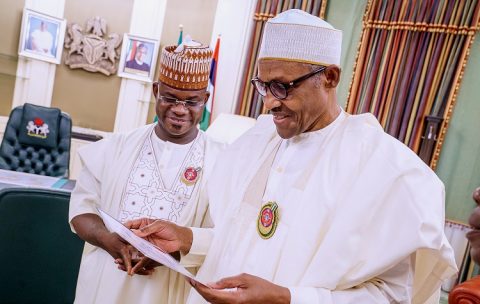 (AFRICAN EXAMINER) – Governor Yahaya Bello of Kogi State has declared that he is ready to meet opposition to his electoral victory  in court.

Bello won the gubernatorial elections. Kogi state on November 16, which gave him a second term of four years in office.

Speaking to State House Correspondents after presenting his Certificate of Return issued to him by the Independent National Electoral Commission (INEC) to President Muhammadu Buhari at the Presidential Villa, Bello explained that he was sure of his electoral victory even before he election.

Bello said, “I told you sometimes back that the issues of winning the election was not in question but the margin with which I will defeat my opponent, and that he will have no reason whatsoever to go tribunal.

“However going to the tribunal is their right and if they so wish, we will meet in court”, he stated.

The Governor called on all those who contested the governorship position with him as well as all the people of the state to support his government in order to move the state forward on the path of progress and prosperity.

“I want to use this opportunity to call on all those that contested the elections with me starting from the primary of our party to the main election, all other political parties to please join me, we are all citizens of Kogi State, in the this next level so that we can together do more for Kogi State”

Bello said, “I inherited a state that was largely divided along ethnic lines but this particular election, I was able to put that behind us, that ethnicity is not the way, that it is a monster that has held the country down and that tore the states apart sometimes”

“By the special grace of God, today in Kogi State ethnicity has been buried finally because in this particular elections I won overwhelmingly in all three senatorial districts of Kogi State.
We have a lot of task ahead of us, the journey has just begun,

“I need the cooperation and understanding of every citizens and residents of Kogi state to join hands with me so that we can do more for Kogi State”, he added.

Speaking earlier, Chairman of APC, Adams Oshiomhole, said Bello’s victory represents many things for those who truly believe that Nigeria politics should move away from sentiments to dealing with people for who they are rather than where the come from.

He further said, “I think that for analysts and keen observers for Nigeria’s politics particularly the geo-political politics, you will agree that the victory of Yahaya Bello in Kogi State represents many things for those who truly believe that Nigeria politics should move away from sentiments, to dealing with people for who they are rather than where the come from.

“So for us in the APC, we are very proud and we presented him (Bello) to the President. The President was very proud, of course he congratulated, he was happy to see the certificate and he has encouraged us to recognise that the reward for hard work as they say is more work.

“I am sure that governor Yahaya Bello having passed through the learning curve is going to approach the second term with all the vigor with eye for posterity and legacy marks in the development of Kogi state.

“We as party we appreciate the people of Kogi State for standing by the party and voting for Yahaya Bello and I want to assure them that like we said during the campaign, governor Yahaya Bello will do everything possible to ensure that as they say to whom much is given much is expected,

Oshiomhole further said, “he (Bello) will give his all to the people of Kogi State to reciprocate the good will and the confidence that has been reposed on him as a result of the election that was conducted last saturday, November 16.”