Kwara State students under the auspices of National Association of Kwara State Students (NAKSS) have endorsed the educational and developmental programmes and policies of Governor Abdulfatah Ahmed.

The students, who pledged their total support for the success of the APC government under Governor Abdulfatah Ahmed, gave the endorsement during a solidarity visit to Governor Ahmed, described the Abdulfatah Ahmed administration as “a period of change, a period of development and a period of giant stride in the education sector”. 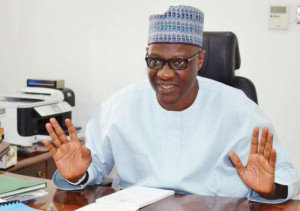 The students, led by their National Public Relations Officer, Comrade Obafemi Oyeniyi, said that in the last three years tertiary institutions in the state have had infrastructural development, including the building of 10 new lecture halls at the State College of Education, Oro; building of an e-library of 500 sitting capacity at the State polytechnic, Ilorin to boost research and learning; as well as the 1000 capacity auditorium at the College of Arabic and Islamic Studies.

The students also commended the State government for the payment of bursary and scholarship to students of the State origin and declared “Today we have come in thousands to declare our total support for All Progressive Congress because it is in you our problems of epileptic power supply will be solved, unemployment will go, corruption will end, rule of law will become the order of the day and strike will end”.

Governor Abdulfatah Ahmed in his address said his administration remained committed to the implementation of policies and programmes that would make the state more enabling for the people of the State, especially the youths, realise their potentials as State builders.

Dr Ahmed said it was in thiis light that the state government initiated entrepreneurship development programmes to create a new generation of job creators and employers of labour rather than job seekers adding that the strategy has contributed immensely to the reduction of unemployment challenges in the State.

The governor urged the students to participate actively in the forthcoming Independent National Electoral Commission (INEC) voters’ registration exercise to ensure that they are not disenfranchised in the 2015 General Elections.