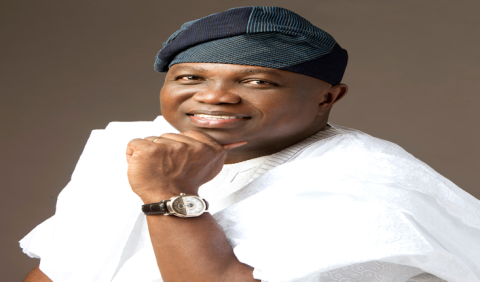 Two people were stabbed on Monday at the Akinwunmi Ambode’s APC campaign at Gbagada area of Lagos when thugs attacked one another, leading to pandemonium at the campaign ground.

The campaign was going on smoothly until a thug group came into the campaign ground to foment trouble, with daggers, knives, guns and other dangerous weapons freely used.

This disrupted the campaign as more than half of the crowd left the venue in a hurry to avoid being caught in the crisis. There was a pandemonium when the thugs brought out knives, daggers and other weapons to attack one another.

One of them received multiple stabbing on his side, but stayed alive after policemen at the scene came to his rescued, shooting into the air to disperse the thugs.

Another thug was stabbed in the neck and tried to escape the scene to avoid further stabbing. Policemen later came in large number and chased the thugs away, but there was intermittent shooting outside the venue after the thugs had been driven out.

A report with Thisday news paper was attacked by the thugs and had his iPhone and N150,000 taken away from him.

However, speaking at the campaign, Governor Babatunde Fashola accused President Goodluck Jonathan of placing his campaign advert illegally on the stretch of Lagos tollgate to the Island claiming it is a federal toad.

“I saw the desperation of the President and his party today. On the Third Mainland Bridge today, all the president posters have flooded it. In the constitution, the local government has the responsibility for advert; that is one of their sources of generating revenue.

“And they have been working with LASAA, not only to clean up the state but to put an institutionalized framework for advert management but the President and his supporters have taken over the advert spot on the road,” he lamented.

According to Fashola, “They will claim that the road belongs to the Federal Government. That is not the point, if you build the highway way, advertising on it belongs to the local government anywhere in Nigeria. LASAA already had contractual agreement with some private companies who have paid to use that place.

“Without applying to LASAA and respect for the existing contractual right of business in the country, he has taken over that place with his posters. Isn’t that lawlessness? Is that the kind of leader that should rule the country?”