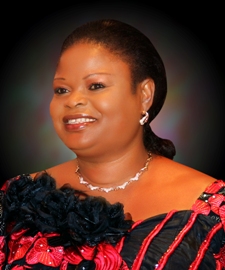 The Deputy Governor who addressed a Press Conference on the International Day of the African Child 2014 at the Conference Room of the Round House, Alausa, in Ikeja, Lagos, Nigeria

She said introducing  stringent sentence like life imprisonment for convicted offenders without any option of fine, would deter other from raping innocent girls, adding that the full support of the law enforcement agencies and the Courts are also required to ensure justice and successful prosecution of offenders.

She reiterated her call for the conduct of psychiatric test on perpetrators of rape and sexual harassment which she said has been on the increase, adding that some of the cases are simply inexplicable and calls for concerns.

Orelope- Adefulire  called for collective commitment towards putting a stop to all forms of sexual harassment, assault and abuse particularly rape cases against the girl- child,  added that everyone must be ready to break the culture of keeping silent on rape cases and violence.

She added that parents must not hesitate to report cases of sexual harassment, assault and abuse to the Police in order to expose and prosecute the offenders to serve as a deterrent to others.

She explained that the objective of the media briefing was to call for more action to raise the tempo of awareness and sensitize the society on the measures to safeguard the rights of the child as enshrined in the United Nations Convention on the Rights of the Child 1989, Article II and the Organisation of African Union Charter on the Rights and Welfare of the Child 1991.

She explained that the underlying factor, however, that can help realize the fundamental rights remains free, compulsory and quality education and that it is an enduring legacy that can help to deliver the citizenry from all forms of oppression, ignorance, poverty and diseases.

“We must be committed to break all barriers for full access to the best of education irrespective of class or socio- economic backgrounds, achieving this, it will be very easy for us to help the child realize his/her goals and promote their rights”, he said.

The Deputy Governor also reiterated the clarion  call for the rescue of the school girls who were abducted from Chibok in Borno State almost two months ago and appealed to the nation’s leaders to do everything possible in ensuring that the innocent girls are brought back alive as soon as possible.

“There is a need also to as a matter of urgency see the reasons for the need to start counseling and motivate children and allay their fears that their rights, safety and security will be guaranteed as the incidence in Chibok has created a lot of trauma in some of the children even outside Borno State..,”she said.

According to her parents and guardians, especially the mothers should be more vigilant, available and committed to the welfare of their children by balancing their career with their duties as mothers.

She reiterated her call for the conduct of psychiatric test on perpetrators of rape and sexual harassment which she said has been on the increase, adding that some of the cases are simply inexplicable and calls for concerns.

She added that any woman who dressed scantily is only cheapening herself and would end up exposing indecently what God has ordained to be kept away from the prying eyes of all.

Sent from my BlackBerry® smartphone from Etisalat. Enjoy high speed mobile broadband on our easyblaze and plans for BlackBerry. Visit www.etisalat.com.ng for details.