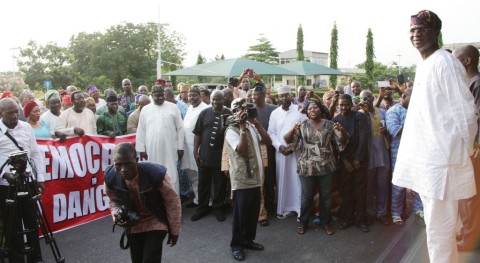 Members of the Lagos State House of Assembly and their Ekiti State counterparts embarked on a peaceful protest to the State Governor, Mr. Babatunde Fashola’s office over the attempt by the Nigerian Police to prevent members of the House of Representatives from sitting on Wednesday as well as the purported impeachment of the Ekiti Speaker by seven out of 26 members of that State’s House of Assembly. 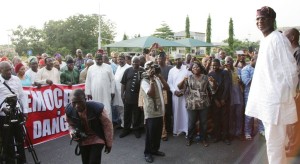 Led by the Lagos Assembly Speaker, Adeyemi Ikuforiji, the members, including the Speaker of Ekiti House of Assembly, Adewale Omirin, his deputy and other principal officers of the Ekiti House of Assembly as well as members of Civil Society Organizations submitted a letter of protest to the Governor for onward transmission to President Goodluck Jonathan.

Ikuforiji, expressed concern over the attempt by the Nigeria Police to stop members of the House of Representatives from gaining entry into the Chambers on Wednesday, saying members were also shocked by the turn of events in the Ekiti House of Assembly where seven members sat to take decision in the absence of 19 other members.

“This is not a good sign for our young democracy. We are worried; Lagosians are worried and many Nigerians are worried. We want you to convey our displeasure to the President of this country. A lot of things are happening that make us to think that Mr. President should wake up from his slumber and bad dreams”, the Speaker said.

Urging Mr. President to uphold the Constitution of the country, the Speaker praised Governor Fashola for his non-interference with the State legislature in the last seven years pointing out that he had to summon an emergency session of the House to deliberate and act on the issue.

He told the Governor, “All the people you see here and many others who could not make it here were at that special session. We condemned in totality the activities of the Inspector General of Police in Ekiti and the National Assembly yesterday. When we saw on television a Governor, who claims to have experience, coming on board to tell Nigerians that he has given recognition to a new Speaker elected by seven out of 26 members of the House and he has no apology, I now understand that he has experience in illegality.”

Speaking on behalf protesting lawmakers who were armed with a big banner with inscription, ‘Democracy in Danger,’ was the Ekiti Majority Leader, Mr. Churchill Adedipe, said that the crisis started with the incumbent Governor, who ‘blackmailed’ them in public.

He noted that the impeachment was sponsored by the Governor after they refused to approve the list of commissioners and other aides sent by the governor, saying “we didn’t see the people the governor forwarded their name to us. And we decided to adjourn the sitting till the next day, to allow the house do its findings. This alone infuriated the incumbent governor.”

Receiving the letter with a firm promise to dispatch same to Mr. President, Governor Fashola, expressed concern over the recent happening in the polity but called for restraint in undertaking any reactions to the occurrences.

Fashola who also urged Nigerians not to be afraid, gave assurance that all would be well but charged all and sundry to play their roles well “to make all well”, adding, “All of us must show restraint even as we protest injustice. We have made a clear and very unambiguous choice about how we want to govern and how we want to be governed. We made that choice since 1993.”

Noting that democracy is not an easy way to govern, the Governor declared, “It took six years before that choice was realized and it cost a lot of lives and a lot of discomfort.  But those, sometimes, are the price of liberty. And since then we have shown how enamoured we are for democratic governance.”

He said such times must also require a mutual commitment to reach across the aisle to a middle ground, adding, however, that “it is only those who are really concerned and passionate, not about themselves, not about their own bruised or broken ego, who reach for the middle ground.”

Fashola, who expressed the confidence that a middle ground would be found in the whole conflict, added,  “You know, the idea of Separation of Powers is not divine; it is man-made, by great men who lived before us. So whatever ideas they have evolved must be subject to human limitations, they can’t be perfect.

“So when it becomes difficult, we also must adjust, the system must not adjust for us”, the Governor said adding that there are rules in the House about how leadership evolves and how leadership can be changed.”

He added: “Sometimes this contest gets really intense. But once you play by those rules and you lose, you can’t invent your own rules; there must be another day for a contest,” pointing out that the truth must be the truth and must not have different meanings even if two people are looking at it.