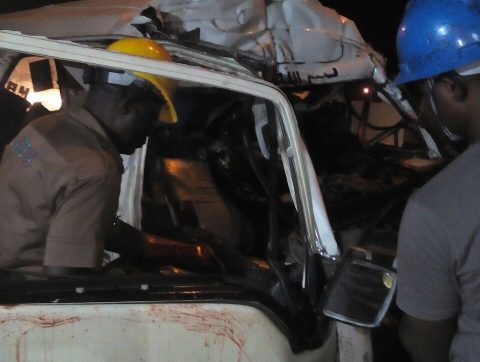 At least, six people have died and 23 others injured in two separate accidents that occurred in Lagos, Nigeria Wednesday night.

It involved a Mazda commercial bus with Reg. No. AKD 292 XL coming from Aja-Lekki en-route Oshodi and rammed into a broken down MAN truck at about 10.24 pm on Wednesday at 3rd Mainland bridge inward Oworonshoki.

LASEMA’s Emergency Response Team, ERT at the scene of the accident said the commercial bus rammed into the broken down truck while on top speed.

According to LASEMA’S General Manager, Mr. Michael Akindele,  “Five victims, adult male were trapped and  the vehicle extricated by the Agency Emergency Response Team and their bodies recovered dead while six other victims, adult male were rescued alive with severe injuries and were taken to the Accident and Emergency Centre (Trauma Centre) and Gbagada General Hospital by the Lagos State Ambulance Service, LASAMBUS.

“The dead bodies were also evacuated by the State Environmental Health Monitoring Unit, SEHMU to Mainland Hospital Mortuary, except the commercial bus driver whose body was released at the request of the family members and friends through the intervention of the Lagos State Commissioner of Police who was present at the scene of the accident.”

He said the truck which caused the accident was also set ablaze by angry mob who were upset that the truck was abandoned on the road.

Akindele stated that the Lagos State Fire Service were able to put out the fire, while the recovery of the accidented vehicle was carried out by officials of LASEMA, Lagos State Traffic Management Authority, LASTMA; Federal Road Safety Corp, FRSC; Rapid Response Squad, RRS and the Nigeria Police Force, adding that angry mob also injured one of the LASEMA officials.

The bus was said to have somersaulted with 17 persons injured with various degrees of injuries and were taken to the Trauma Centre at Toll gate by LASEMA Emergency Response Team and LASAMBUS.

A female adult, identified as Iya Ewe died on the spot and the recovered body conveyed by SEHMU to the Mainland General Hospital.